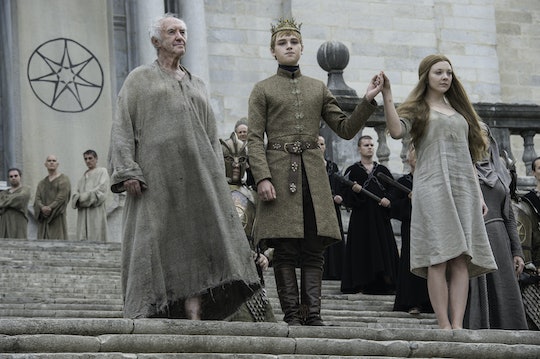 Who Will Be The High Sparrow's Champion On 'Game Of Thrones'? A Dead Character May Return

The conflict brewing between the Crown and the Faith on Game of Thrones has dominated the stories in King's Landing for a while now, and it finally looks like it's coming to a head. So far, all the major strategic victories have belonged to the High Sparrow: he had both the queens imprisoned, he humiliated Cersei publicly, and now he has Tommen's full support. However, there is a trial by combat coming up that will determine Cersei's fate in regards to the charges against her (incest, treason, and regicide). Cersei has Zombie Gregor Clegane for her champion in the trial, and it seems impossible for her to lose with someone like that on her side. But who will be the High Sparrow's champion on Game of Thrones?

Cersei confessed to an affair with her cousin Lancel, but that was just about it. Her walk of atonement may have absolved her of some of her sins in the eyes of the Faith, but she still has to stand trial. Now that the High Sparrow has Tommen on his team, he's even more powerful than before and Cersei has even more at stake. There are a few guesses when it comes to the High Sparrow's champion, with many intended to strike back at Cersei personally, but the prevailing theory revolves around someone from Zombie Gregor's past: his brother Sandor, the Hound.

While this theory (referred to as "Cleganebowl") is a very popular one for book readers, there haven't been as many hints on the show. Though presumably left for dead by Arya, it's hinted at in A Feast for Crows that he has actually survived. In the book, Brienne and Pod travel to the Quiet Isle, where it is implied that the Hound might be living peacefully as a gravedigger amongst the monks who live on the island. This connects the Hound to the Faith of the Seven, making it plausible that he might be available to them as a champion. He also hates his brother and has sworn to kill him more than once, so he would probably be open to the battle.

Though there's no confirmation that it will definitely happen, many other fan theories have come to pass on the show, such as the identity of certain characters like Coldhands (the recently returned Benjen Stark) and Jon Snow's resurrection thanks to Melisandre.

The show could also throw in a different surprise character as the High Sparrow's champion. It might be Lancel, Cersei's cousin slash lover slash Faith fanatic. Some theories even favor Tommen himself as the champion, speculating that it could be a power move on the part of the Faith intending to force Cersei to give up the trial by combat to protect Tommen. This would almost definitely result in Cersei losing her trial, providing another victory to the Faith. The other outcome would be that Tommen dies and his death drives her completely insane.

While I wouldn't bet money on the king of Westeros himself acting as a champion – aside from the fact that he's an actual child – any of those options would do some real damage to Cersei's psyche and sense of self-preservation. However, a returned Hound would be a much cooler fight to witness, and Game of Thrones might not be able to resist that showdown.