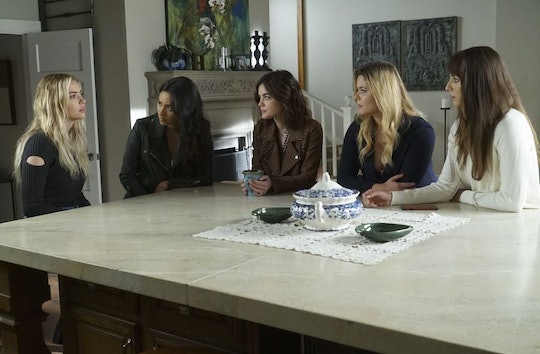 Who Will Die In The 'Pretty Little Liars' Season 7A Finale? The List Is Kind Of Long

This Tuesday is the midseason finale of Pretty Little Liars, which means things are about to get even crazier in Rosewood and it's possible someone may not make it out of the finale alive. So who will die in the Pretty Little Liars Season 7A finale? Honestly, it's anyone's guess at this point in the very twisted and unpredictable series. There's so many possible victims to choose from, just ask A.D. Could it be one of the Liars? Jenna? Noel? Mary Drake's missing child? Who knows?

This season there have been so many twists to the show — i.e., Noel is back, Jenna is back, someone is Mary Drake's other child, the Liars killed a person, and then covered it up — the finale is surely not going to disappoint in shock value. There were many teases throughout the season, but the list has not narrowed down at all. If anything, it has grown. Seriously, I've compiled some possibilities and there really isn't any clear answer at all. Here are just a few possibilities for who may get the axe in the finale. (Hopefully they're crossing their fingers and toes.)

There have been rumors swirling around for a while now that Toby will see his end in the Season 7A finale, which would be pretty shocking for longtime fans. Does he get shot? Is Jenna the responsible one for his potential death (that would be quite the full circle for the two of them). Either way, it seems Toby might not get to leave Rosewood and find his happily ever after with Yvonne after all. Poor Toby.

If it's not Toby that meets his end on Tuesday, another possible victim is Jenna. Since she's returned to Rosewood she's been mixed up in some suspicious activities with Sara Harvey and Noel. So far Sara has ended up dead and Hanna just knocked Noel unconscious and took him as her prisoner. Not to mention she was friends with Archer, who is also notably dead. It seems Jenna's friends are just dropping like flies and she may very well be next.

In the preview for Tuesday night's episode, it's clear that Noel is able to escape from Hanna's trap, but that doesn't mean he'll make it out of that house (secret lair?) alive. For one, Hanna's clearly on the war path and she's reached her tipping point. Killing Archer was an accident, but killing Noel definitely wouldn't be, and if Noel pushes too hard Hanna may just push right back and the other Liars may not be able to stop her.

Mona hasn't really been seen since she helped get rid of Archer's car. However, on Tuesday, Mona will be back to help with the whole Noel Kahn situation, because of course Mona is the person you call when you kidnap someone. If Mona, dies it'll most likely be because she was collateral damage. It's clear Hanna has no idea what she's doing with Noel, and based on the preview for the finale Hanna's plan is quickly foiled. Also, let's note that this wouldn't be the first time Mona might die.

Although this seems highly unlikely, it's also possible that everyone makes it out of the finale unscathed, or at the very least, alive. Again, the odds of this are slim, it is Pretty Little Liars after all, but one can hope.