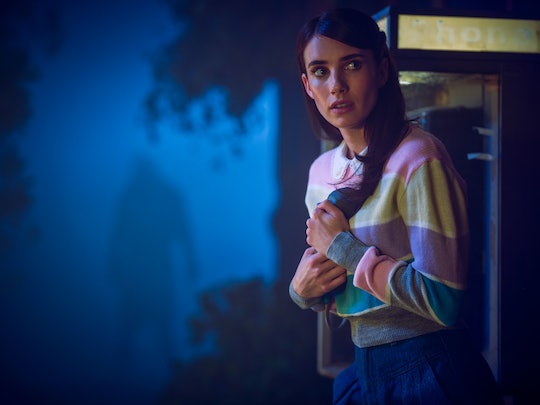 Not Everyone On 'AHS: 1984' Will Survive Camp Redwood

The ninth season of American Horror Story is a classic slasher that embraces all the tropes of the genre: the summer camp setting, the 1980s style, the stock characters. That means '80s horror flicks could provide clues for how the season will turn out. The typical twists of the genre could even reveal who will die on AHS: 1984, depending on whether or not the season decides to subvert expectations.

For years, slasher movies tended to be formulaic. There would always be a Final Girl who survived all the killer's attempts to take her out; she was usually a girl-next-door type, kind-hearted and virginal. More sexually free characters would be despatched with early — it was almost a guarantee in many horror films that if a character had sex, they would die soon after. Black characters were often killed off first, and queer characters could be villainized. It was all very problematic, to say the least.

AHS: 1984 follows in the footsteps of those earlier horror movies, like Sleepaway Camp or Friday the 13th. If it decides to stick to tradition, then it may be easy to predict which characters are goners. Good girl Brooke (Emma Roberts) would make it to the finale alive; flirtatious Montana (Billie Lourd) would meet an untimely end; Ray (DeRon Horton) would not be long for the world. But surely AHS wouldn't be that predictable.

Tertiary characters are likely to die before the main cast, like the mechanic (Don Swayze) who died in the first episode, "Camp Redwood." The same fate befell two other characters in Episode 2: Dr. Karen Hopple (Orla Brady), who arrived to warn the camp about Mr. Jingles being on the loose, and Blake (Todd Stashwick), a nefarious figure from Xavier's (Cody Fern) past.

Since it seems like one-off characters are cannon fodder, I wouldn't expect Chef Bertie (Tara Karsian) to last long either. She made just enough of an impression in her first appearance to be memorable before she becomes a victim of the killer stalking the camp. Her death would increase the fear of the murderer without actually having to do away with any of the main characters. So tropes or not, I'd guess that Chef Bertie will be gone sooner rather than later.

I would also put my money on Chet (Gus Kenworthy) not making it to the finale, along with Trevor (Matthew Morrison). Though it's possible both characters have unsuspected depths, both are perfectly positioned for surprising deaths: cute, funny, and fairly disposable. Sorry, boys. Xavier seems to have secrets he's still coming to terms with that may resurface later, so he might have a little more longevity.

But figuring out who else might die is trickier. Killing Brooke off would be shocking, because she seems like the de facto main character. Much of the first episode was shot from her perspective, following her at home and on her own more consistently than the other characters. But if the show decided to do the opposite of its 1980s predecessors, then Brooke would die, and characters like Montana, Ray, and Nurse Rita (Anjelica Ross) would be more likely to survive.

Some fans believe Margaret (Leslie Grossman) is the person who's actually behind the killings at Camp Redwood. If that's true, then she'll be around for a while until she is (presumably) defeated. Regular AHS cast members are more likely to last longer, too, if only because that's usually how things go on this show.

Making predictions with only two episodes to go off of might be a fool's errand. It may take more time to understand exactly what this season's goals are, and how interested it is in keeping the audience on their toes. There's a chance the deaths will be completely unexpected — or, like Swayze's character threatened in the premiere, perhaps every last one of them will die at Camp Redwood. No survivors would certainly be new for AHS.