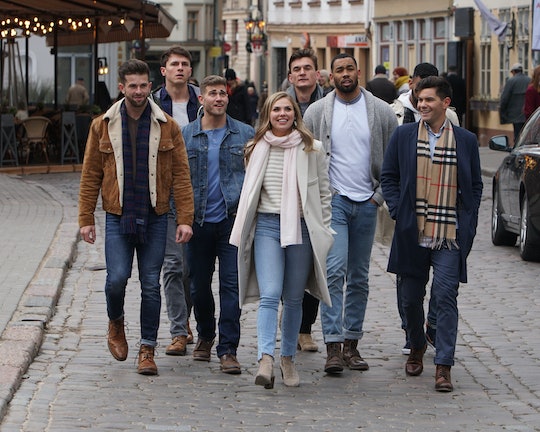 Well, folks, The Bachelorette is nearing an end. With hometown dates on the horizon, Hannah's journey is about to become that much more difficult as she chooses one of these men to be her forever mate (or something). After a dramatic turn of events, she's left with four dudes who seem equally stoked to introduce her to their families. So, who will Hannah eliminate after hometowns? Here are my thoughts in the most spoiler-free way possible.

To deduce who she *may* send home, let me break down the most recent events. In the span of just two hours Hannah broke three hearts, sending Connor S., Mike Johnson, and Garret home. Connor S. went to Hannah after he wasn't chosen for a one-on-one again, where she gently let him down. It's hard to say if he'd have suddenly found his footing before the rose ceremony and managed to make to the next round of dates. He didn't want to wait around for the chance, and I don't blame him. Mike, oh dear Mike, genuinely felt as though he was ready to marry the former Miss Alabama USA, but when Hannah sensed that she didn't love him as fiercely as he deserved, she sent him on his way. Unrelated: He is now the world's most eligible bachelor and would make the best next leading man, ABC. Just saying.

Then, with the constant feuding between Luke P. and Garrett — so constant Luke even tossed actual bologna into Garrett's lap (super mature) — I was only a little shocked that she sent Garrett home over the attention-seeking Luke P. The villain of the show makes things interesting, but with Hannah's heart on the line, it's getting a little old. Luckily, promos show it's getting old for her, too. All of that is to say, with Tyler C., Peter, Jed, and Luke P. chosen for hometown dates, I don't think it's a stretch to call it: Luke P. will be the one sent home sometime before, during, or directly after hometown dates.

It's also not a stretch to say Luke P. is among the least liked contestants in Bachelor Nation history. He hasn't won any popularity contests among housemates, but Hannah's also had her share of concerns and uncomfortable moments with the Gainesville, Georgia native.

In my opinion, he's had more than enough chances to redeem himself, and is the only one who continually puts his foot in his mouth — but is still there. I don't think he will be for long, making the final three between Tyler C., Peter the Pilot, and newest controversial contestant, Jed, who may or may not have had a girlfriend before filming. Don't even get me started on that one.

Of the four remaining men, I think Luke P. is the safest choice for next to get the cut. In promos advertising the next few episodes, Hannah and Luke are seen getting in a ~major~ tiff over Hannah's sexual history that may or may not end with Hannah flipping him off as he drives away in a limo.

If I had to eliminate from there, based solely on my own opinions, I'd then cut Jed (despite everything the internet is shouting), then Peter, and Tyler C. would be my winner. I'm not the chosen Bachelorette though, and I think Hannah's going in a direction I, a fan, wouldn't choose for her. If it were up to me, Luke would've been gone long ago, and Mike Johnson would have surged ahead. No matter how this all turns out, it's been a wild ride. Thanks for that, ABC.