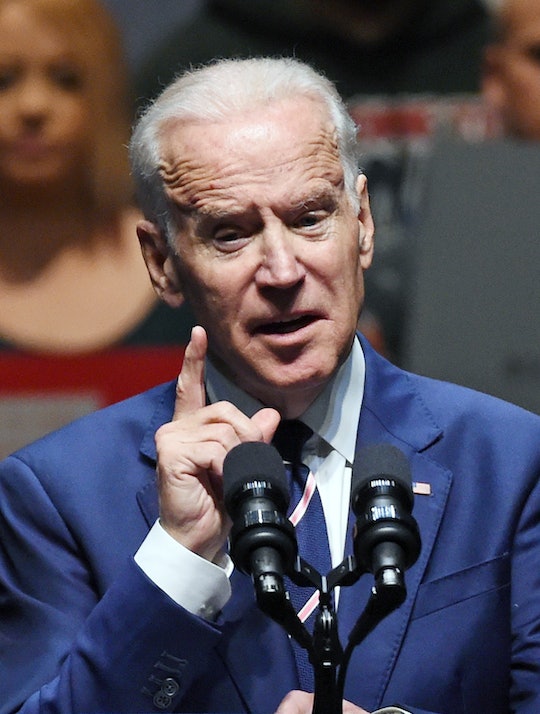 Who Will Joe Biden Endorse? He May Have Just Backed Hillary Clinton

It's not uncommon for party leaders to endorse presidential candidates, but sitting presidents and their vice presidents don't often get involved with who will take their jobs. That being said, they can send messages to the base when they can. While President Obama has kept pretty quiet throughout this election cycle, some Democrats have been waiting to see who Vice President Joe Biden will endorse. Despite his reputation for sometimes putting his foot in his mouth, Biden answered a question about the Democratic nominees for president fairly diplomatically.

In an interview this week, Vice President Biden told Mic that he "would like to see a women elected," but that both Vermont Sen. Bernie Sanders and former Secretary of State Hillary Clinton were qualified.

According to Mic, the Vice President added that he wasn't going to go down the "rabbit hole" of endorsing a candidate. Despite an aide trying to cut him off, Biden explained, saying that he and Obama would not be endorsing anyone outright since they had decided when they ran to "let the party decide." "But gosh almighty," he continued, "they're both qualified. Hillary's overwhelmingly qualified to be president."

The vice president's comments are all the more timely as Sanders and Clinton have been debating on the campaign trail and in the media about who is better qualified to serve as president.

Biden's comments seem to put some of that debate to rest, though his comments about wanting to see a female elected seem to imply that he's leaning more towards Clinton than Sanders, despite their qualifications. In the same Mic interview, he made it a point to note that even though the candidates were going back and forth about who would be better prepared for the job, Sanders never said that she wasn't qualified just because she was a woman.

He also noted that it didn't seem to him that she was being held to any higher standard because of her gender — but Biden said that that wasn't the point. "This country's ready for a woman," he continued. "There's no problem. We're going to be able to elect a woman in this country."

So he hasn't endorsed Clinton. But he hasn't not endorsed her either. Politics can be a tricky like that.

Then again, the Vice President has been vocal about Clinton's campaign in the past. In January, he questioned Clinton's ability to speak about income inequality as authentically as Sanders, as it was something "new" for the former Secretary of State. Despite his comments today, and in the past, about the candidate, Biden seems to be more about sticking with the team than anything else. It's in line with his long-documented desire to keep the race a clean fight. "I don't think we should look at Republicans as our enemies," the vice president said in a statement from the Rose Garden, after announcing he would not be running for president back in October last year. "They are our opposition. They're not our enemies."

Hopefully, the Vice President didn't make any new enemies with his almost-endorsement today. It's not easy to filter Joe Biden, but if you read between the lines, he seems just as torn as the rest of the country about who the Democratic nominee should be.

More Like This
Dr. Jill Biden Just Delivered Some Frank, But Powerful, Advice On Motherhood
What You Need To Know About Snapchat’s New Parental Controls
We Need To Talk To Our Kids About Brittney Griner — Here's How
Neil Patrick Harris & David Burtka Hate Children's Menus — And With Good Reason