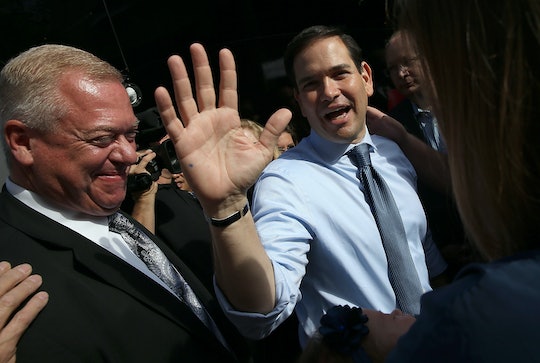 Who Will Marco Rubio Endorse, Now That He's Officially Out Of The GOP Race?

On Mega Tuesday, after losing his home state of Florida to Donald Trump, Marco Rubio dropped out of the race. Many Republicans hoping for a bright-eyed establishment candidate will mourn the end of his candidacy. Others will miss his robotic talking points and his affinity for tiny water bottles. But now that he's no longer running, who will Marco Rubio endorse? One thing seems clear — that candidate will not be Donald Trump.

Over the past few weeks, Trump and Rubio attacked one another in increasingly angry and immature ways, with Rubio making fun of Trump's "small hands" and implying that... well, you know. Yesterday, he expressed regret about the way the contest had devolved, and warned that Trump could be dangerous for the Republican party. "Leadership is not about going to angry and frustrated people and saying, 'You should be even angrier and more frustrated, and you should be angry and frustrated at each other,'" Rubio said at a rally in Florida. "That is not leadership. You know what that is? That's called demagoguery, and it is dangerous."

Now that Rubio's out of the race, some hope that his supporters will rally around either Texas Sen. Ted Cruz or Ohio Gov. John Kasich, helping one of those candidates halt the Donald's seemingly unstoppable surge. Kasich certainly seems to be angling for the endorsement, with the following tweet:

However, Cruz is much closer to Trump in the delegate count, with 369 delegates to Kasich's 129. That's even fewer delegates than Rubio had, and he dropped out. Many people had counted Kasich out entirely long before this, and remain surprised that he's still in the race. Endorsing Cruz could be more effective for Rubio if the goal really is to get anyone but Trump to the nomination.

Cruz wasted no time hopping on the Rubio praise train, with not one but two tweets, saying:

Top that, Kasich! Hmm, and what kind words has Trump had to say about Rubio?