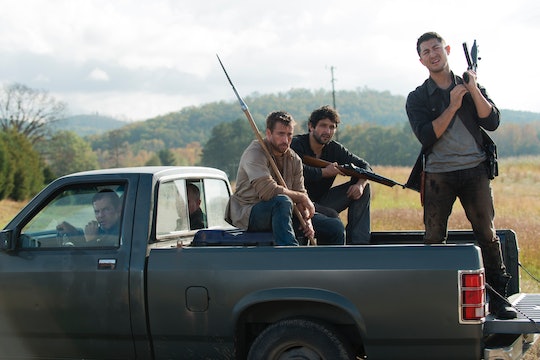 Who Will Negan Kill On 'The Walking Dead'? No One Is Safe

Everyone knows that a big death is coming in the season finale of The Walking Dead. Negan is a major villain in the comics, responsible for Glenn's violent death thanks to a baseball bat wrapped in barbed wire, which fans have finally caught a glimpse of in a promo. It's an iconic scene in the comics that fans have been both waiting for and dreading, but because the show is known to change things from page to screen, another character might be the one to take the hit. The only question is who? Who will Negan kill on The Walking Dead?

Theories have been flying around the Internet with the popular guesses landing on several fan favorites: Glenn, who almost dies five times a season; ultimate badass Daryl; the recently conflicted Carol; Abraham, who narrowly missed his own comic death just a few weeks ago; or maybe Maggie, whose death would certainly be shocking and traumatic because of her pregnancy. Reddit user heyaguy put forth the theory that it might not be just one character – it might be many: "I'm thinking it's going to be people and not just one person. You guys gotta think about how Rick's group has been shown slaughtering saviors for the past three weeks. In a way, [Negan] is gonna look justified in his revenge. I don't think it will stop with one person."

But just in case it does, let's run through each potential victim. Glenn's possible death has been in the cards for a while now, with every near miss making fans fear the worst. However, Glenn's comic death is common knowledge by now and the lack of a surprise factor might keep him safe as the show's writers seek something more shocking. Daryl's death has potential because he has been involved in all of the showdowns with the Saviors so far; he even blew up a group of them with a rocket launcher. Negan would definitely have reason to take revenge on Daryl, and the death would be absolutely devastating to fans.

In a theory put forth by Forbes, Abraham also seems likely. He's a more prominent character than the background Alexandrians, but he's not on the same level as the other characters in question. His comic death was given to Denise, which could mean that he might take Glenn's spot, and he has had the recent character development that usually signals someone is on their way out. If so, poor Sasha; if that happened, she'd be almost as much of a black widow as Rick.

Maggie, unfortunately, seems equally possible. The show has placed a lot of emphasis on how she and her baby represent hope for the community, and if Negan killed her, it would be the ultimate destruction of that hope. Actors Andrew Lincoln and Lauren Cohan have spoken about how hard the death impacted them, to the point that they didn't want to go in to work, and that would make sense if it were Maggie. It would also be a tough blow for Glenn, especially after a season of them; the death of Maggie and their baby might push him over the edge in a way that is narratively rich. Everyone loves Maggie, so her death could galvanize the entire group.

Then there's Carol. The creator has promised that Carol is the one character that won't ever be killed off, which could mean the shock of actually doing it would be the ultimate surprise. She's missing in action right now and that could very well mean she's fallen into Negan's clutches. She's also been having a real tough time lately and any time a character is going through a lot of turmoil, it's best to keep one eye open for their demise.

Then again, the show might just surprise us and go for someone entirely random. Or it might pull the same cliffhanger it pulled in "East" and keep the reveal of who was on the receiving end of the attack until Season 7. The audience was left waiting weeks to see what became of Glenn, so the series clearly doesn't mind leaving everyone hanging.