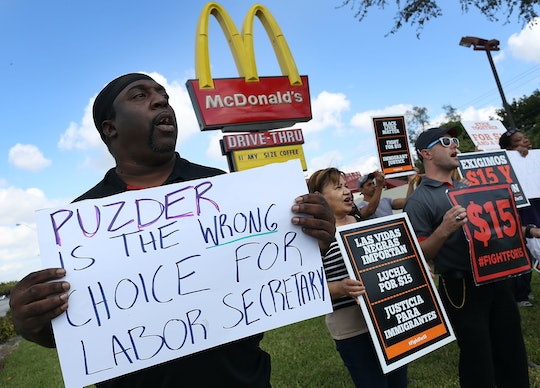 Who Will Replace Andy Puzder?

Andrew Puzder has withdrawn his nomination as President Donald Trump's pick for labor secretary. News broke of Puzder's possible decision to step down from the nomination Wednesday afternoon, and was confirmed by Puzder himself in a statement released later the same day. "After careful consideration and discussions with my family, I am withdrawing my nomination for Secretary of Labor," Puzder explained. Already, many wonder what will happen next, with the question of who will replace Andy Puzder as labor secretary nominee taking the top spot on the inquiry list.

Even though many of Trump's appointees and nominations have been highly contested, Puzder was different. Not only was he opposed by Democrats, but several Republicans also took issue with Puzder's potential conflicts of interest, his companies' provocative advertisements, and abuse allegations made by his ex-wife. (In a statement obtained by Politico this week, Puzder's spokesperson denied the claims, saying that the two remain "close friends today and often spend time together, but none of that context seems to matter to Andy’s critics. Perpetuating these retracted 30-year-old allegations and an impulsive decision to appear on a talk show is nothing more than a desperate attempt to tarnish Andy Puzder at the expense of Lisa [Fierstein, Puzder's ex-wife] and their family.")

Even right-leaning news outlets, such as The National Review, were against Puzder's nomination and made cases against his confirmation. As Puzder's confirmation hearing was expected to take place Thursday, it's unclear what the Trump administration will do next, and who Trump will choose to take Puzder's place.

Trump's former national security advisor, Michael Flynn, resigned late Monday night, after numerous allegations connecting him to Russia were made. Trump tweeted several times following the news break, seemingly attempting to redirect the nation's attention away from any controversy. In contrast, as of yet, Trump hasn't spoken of Puzder's withdrawal, or given any indication of whom he would prefer take Puzder's place.

However, as Trump's previous appointees and nominations have made abundantly clear, the current president strongly admires loyalty, seemingly rewarding everyone who supported his campaign, either publicly or financially.

As we await Trump's new nomination announcement, it's important to note that the Trump administration reportedly just selected its choice to replace Flynn. However, as Puzder was so highly contested, it wouldn't be surprising if Trump and his team chose someone less controversial to take his place and allowed the announcement to fly under the radar. Perhaps Trump might choose someone with public service experience, which Puzder did not have.

Until Trump nominates someone else for his labor secretary pick, though, Democrats and some Republicans are happy to celebrate the departure as a victory.