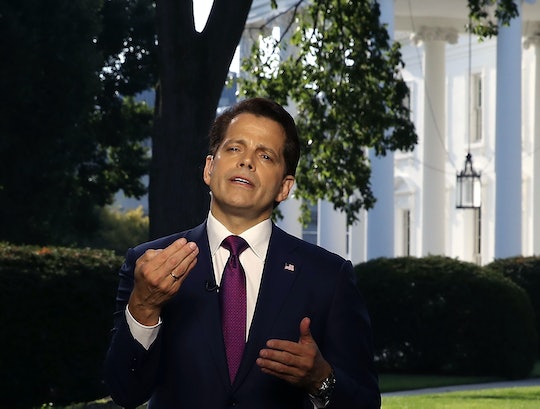 Who Will Replace Scaramucci?

And another one bites the dust. On Monday, the surprising news broke that President Donald Trump had ousted Anthony Scaramucci from his role as communications director, mere days after "The Mooch" took over. So who will replace Scaramucci? The Trump administration is... well, not the most stable place to work, but plenty of people still want in.

Scaramucci seemed to cause a lot of chaos during his brief reign. A quick recap: Sean Spicer resigned his role as White House press secretary over Scaramucci's appointment. (Cue endless gifs of Melissa McCarthy screaming "Spicey out!") Almost immediately, Scaramucci led an attack on Reince Priebus that seemingly contributed to his resignation as chief of staff. Trump replaced Priebus with Homeland Security Secretary John Kelly, and on Kelly's first day in his new position, he reportedly led the charge to kick Scaramucci to the curb. Oh, and Scaramucci's wife divorced him while nine months pregnant, reportedly because of his "sycophantic" relationship with Trump. Whew. Got all that? Did I mention that this game of musical chairs all happened in under two weeks?

So, given what happened to the last guy, who would want to step up to that famous podium and into the glare of the public? Romper reached out to the White House, and did not immediately hear back. But there are a few names being thrown around by people in the know.

It's totally possible, as Elite Daily's Alexandra Svokos says, that current press secretary Sarah Huckabee Sanders will temporarily take on Scaramucci's duties as well as her own. After all, she's been in the spotlight for a few months now without calling up any reporters to unleash tirades about other members of the administration, so that counts for something, right?

Back when Spicer was looking for a replacement, many speculated that conservative talk show host Laura Ingraham would take the role at the White House, but she revealed a certain ambivalence about the job in an interview with "Fox & Friends," saying,

I’ve always said that if it’s something that I think I could do well, and it would really advance the agenda of this administration at a time where I think there’s so much at stake for the country and for the future, you know, I would think about it... I’m not sure the press secretary thing is something I’m dying to do.

Perhaps she'd be more into the role of communications director? Spicer had also reportedly been considering Daily Mail editor David Martosko to take over his duties.

When Sanders gave an official statement about Scaramucci's departure, she said, "Mr. Scaramucci felt it was best to give chief of staff John Kelly a clean slate and the ability to build his own team. We wish him all the best." So whoever takes over will likely have to be Kelly-approved, as well as appealing to Trump and the rest of his team of advisors, which may be a big ask.

With this White House, it's hard to tell if we'll get a big announcement about Scaramucci's replacement in the next few hours, or if it'll take months. But for now, all we can say is goodbye, Mooch. We barely knew ya. (But actually, after that profanity-laced phone call to a New Yorker reporter, we still knew way too much.)