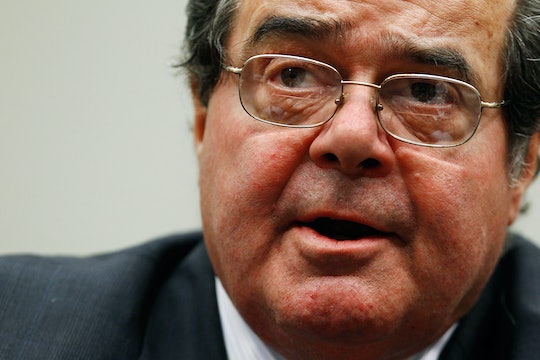 U.S. Supreme Court Justice Antonin Scalia was found dead on Saturday at a luxury resort ranch in West Texas. He was 79 years old. According to The San Antonio Express-News, Scalia died of natural causes in his sleep. As the longest-serving justice on the Supreme Court, the question arises: Who will replace Justice Scalia? While no official statement has been released by the Supreme Court or the White House, the answer isn't yet immediately known. President Barack Obama has the authority to nominate a new justice before his term ends — but if he does remains to be seen.

Scalia was appointed in 1986 by President Ronald Reagan, making him the longest-serving Justice on the U.S. Supreme Court; his official title at the time of his death was Senior Associate Justice. Scalia was appointed to fulfill the seat left vacant by Justice William Rehnquist when he became Chief Justice. Scalia has long been recognized for his conservative opinion on the bench, as well as his scholarly, thoughtful approach to all cases brought before him.

In a statement released Saturday, Texas Gov. Greg Abbot described Scalia as a "man of God" and a "patriot," adding "we pray that his successor on the Supreme Court will take his place as a champion for the written Constitution and the Rule of Law."

Who might that successor be? In an Apr. 2013 piece, staff writer for The New Yorker Jeffrey Toobin, called Justice Sri Srinivasan the "Supreme Court nominee-in-waiting." Toobin's piece has recently gained attention once again in the wake of Scalia's death. Srinivasan was appointed by Obama as a Circuit Judge on the U.S. Court of Appeals for the District of Columbia — the second-highest court in the United States — in May 2013. Born in Chandigarh, India, Srinivasan would be the first Indian-American to sit to the Supreme Court if appointed and confirmed.

This story is developing.

More Like This
This Map Illustrates Just How Many States Would Ban Abortion If Roe V. Wade Is Overturned
13 Moving Photos Of Kids, Families, & More Protesting Abortion Rights Across The Country
MGK Shared An Emotional Tweet After Dedicating Song To “Wife” & “Unborn Child”
Bridgerton Season 3 Will Focus On Fan Favorites Penelope & Colin