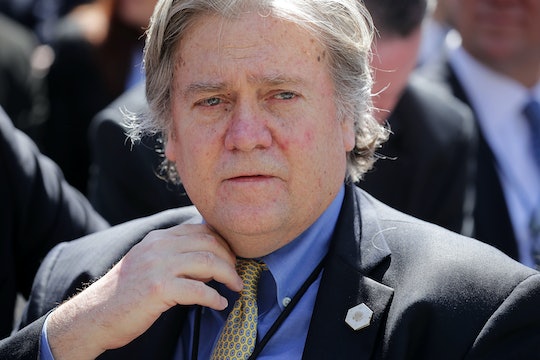 Who Will Replace Steve Bannon?

In a rather abrupt move last week, President Trump's former Chief Strategist, Steve Bannon, parted ways with the White House. Many things about the change have remained unexplained — such as what led to the sudden departure, whether Bannon quit or was fired, and who will replace Steve Bannon now that he's gone.

At the moment, the White House has yet to announce a replacement, and in a statement announcing the personnel change, Press Secretary Sarah Huckabee Sanders didn't delve into the reasons behind Bannon leaving. "White House Chief of Staff John Kelly and Steve Bannon have mutually agreed today would be Steve’s last day," Sanders said in a statement on Friday, according to The New York Times. "We are grateful for his service and wish him the best."

Bannon, who had previously worked as executive chairman at the rather contentious Breitbart News, had originally joined Trump during his presidential campaign last year, then stayed on as chief strategist in the White House after Trump's victory. After the public criticized Trump's response to the white nationalist rallies that took over Charlottesville, however, Trump seemed to distance himself from the man who helped build up his populist persona. According to USA Today, he told reporters last week:

Mr. Bannon came on very late. I like him, he’s a good man, he is not a racist, I can tell you that. But we’ll see what happens with Mr. Bannon.

Rumors abound as to who might replace Bannon. According to the conservative Washington Examiner, Trump reportedly might not want to replace Bannon at all, which would leave the role open indefinitely. If he did decide to fill the position, however, one man under consideration could be senior White House Policy Advisor Stephen Miller, who reportedly helped craft Trump's temporary travel ban and who has espoused anti-immigration views in the past.

What matters more than who replaces Bannon, some argue, is what kind of ideology that person holds. Installing Miller as chief strategist, for instance, would show that not much has changed at the White House, in terms of accepting nationalist and populist sentiments, according to FiveThirtyEight. For the White House to move forward without that image, someone new — and more open to multiculturalism and immigration — will need to take over the role.

Regardless of who Trump eventually chooses, it will be interesting to see how things unfold. A chief strategist is one of the president's closest advisors, and their selection is entirely up to the president (no Congressional approval necessary). Only time will tell who Trump will choose as his next right-hand man (or woman, although for some reason, I don't have high hopes for that).