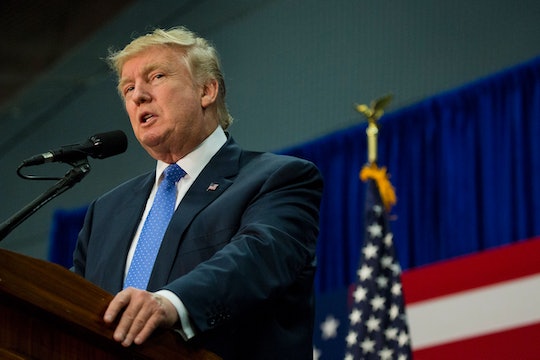 Who Will Replace Trump's Political Director? It Is Unclear Who Will Take Over The Role

It might also be a little tricky to figure out who will take over for the job for political director because, er — the political director did not step down, per se. Trump's political director, Jim Murphy a seasoned political behind the scenes operative, is no longer playing an "active role" in the Trump campaign, according to Politico. "I have not resigned but for personal reasons have had to take a personal step back from the campaign," Murphy said in a statement to Politico. Therefore, Murphy is not completely out of his position, but at the same time — not playing a huge role during the campaign's final crunch time. But, according to Politico, there is no clear word on who will replace Murphy with such little time left.

So what does Murphy's voluntary absence mean for the Trump campaign? According to The Washington Post, "this wasn't the ideal time for a presidential campaign to lose it's political director." One of Murphy's main roles as the political director was to focus on winning over critical battleground states for the Trump campaign. These battleground states — which can switch from liberal or conservative every four years — are critical for candidates to win during the election. According to U.S. World News And Report. Murphy's job was to also serve as the liaison between the Trump campaign and the Republican National Committee. Between Murphy's absence with 17 days left in the election and Clinton polling well in these swing states, it is hard to see just how much pull a new political director could have over voters.

While Murphy has made the decision to step away from the campaign, perhaps one of Trump's children — Donald Jr., Ivanka, or Eric — could step in for Murphy. While they might not have much experience in being a political director or being the force behind a political campaign, they are well liked by Trump supporters and do a great job when campaigning for their father. It might be a far fetched suggestion to think about them fulfilling such an important role but hey — if a major campaign power player can drop out with just 17 days left in the election — then anything can happen.