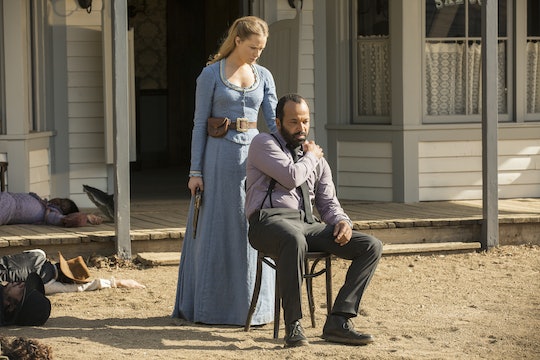 Who Will Return For 'Westworld' Season 2? The Story Is Just Beginning

Season 1 of Westworld ended with a literal bang, and now everyone is wondering just what is in the cards for the next chapter of Delos Destinations. Who will return for Westworld Season 2 and where will their storylines take them next? There are only a couple of characters that we can be sure of seeing again, and some that still have some mysteries surrounding their possibly return. But what we do know for sure is that this story is just beginning.

With a show like Westworld, which ended its first season with Robert Ford's death, it's easy to wonder just where the hell could this story go from here? The world's creator and God-like figure is now (seemingly) gone for good, which means that there's no longer anyone pulling the strings and it's the marionettes who are now running the show. They'll finally have to learn to make decisions for themselves once their programming runs out. If their programming runs out. (Does that happen?)

But this still leaves us with questions. How dead, exactly, is Ford, and might he return in robot form à la Arnold? Will we see the inimitable Anthony Hopkins again, either in flashback form or otherwise? Did Charlotte survive the robot massacre? And what about the lovable Elsie and Stubbs? They've been missing in action for a while now and audiences want to know where they've been.

I can say for certain that young William, played by Jimmi Simpson, will not be returning to Westworld, but his older counterpart, Ed Harris, definitely will. So we know at least one human survived the android rebellion. (And, of course, it would be him.) Our favorite robot protagonists will also most likely be returning, including Evan Rachel Wood as Dolores, James Marsden as Teddy, and my personal favorite: Thandie Newton as Maeve. I mean, come on, what even is this show without Maeve's badassery?

As for Anthony Hopkins, well, let's just say we shouldn't rule anything out. Ford is definitely dead, but there's always a possibility we could see him again. Even if he is not revived as an android, he could still appear via flashbacks if the robots continue to remember past events like we've seen Dolores do in the past. And as showrunner Jonathan Nolan pointed out during a recent interview with Entertainment Weekly, fans should assume nothing for certain. He said:

I think with this show we like surprising people. And we like playing with them. We’ve established the show can track forward and backward in time. … As we’ve established, the hosts can’t distinguish their memories and realities. There is always an opportunity to revisit some of these characters.

So not only could we end up seeing a younger version of Ford prior to his death, but that also makes it sound like fans could be in for another multi-timeline story arc once more. And if that's the case, this could allow Ford to return in some way even without Hopkins.

Another character that I would like to see return is Abernathy, Dolores's erstwhile fake father, who was put out to pasture early in the season. When we last saw him he was being programmed as a sort of data mule and sent out of the park posing as a human. What happened to him and what happened to that project? We'll just have to wait until 2018 to really find out for sure.