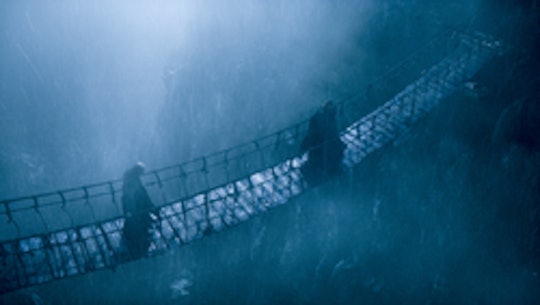 Who Will Rule The Iron Islands On 'Game Of Thrones'? There Are Two Strong Candidates

Last Sunday's Game of Thrones caught us up with Yara Greyjoy, another badass female character who, in my opinion, is sadly overlooked in favor of other fan favorites like Daenerys, Arya, or Brienne of Tarth. But Yara is just as tough, shrewd, and definitely not to be messed with as any of them. This episode left Yara burying her father, Balon Greyjoy, and King of the Iron Islands, at sea, and all of us wondering, who will rule the Iron Islands now?

If this were a just world, it would obviously be Yara. She ruled beside her father for years. He trusted her and consulted her, and she often voiced her opinion even when not consulted. She carried out her duties faithfully and intelligently, earning her father's respect, where Theon continually failed, sometimes fantastically. Also, she is Balon's oldest living heir, which should be a trump card, but somehow never is.

Yara's claim to the throne is thrown off first by the appearance of Balon's intriguing, possibly magical, and definitely murderous brother Euron. As Balon steps out into the torrential rain onto a rickety rope-bridge between two towers (is this the quickest way to the bathroom or what?) he is stopped in his path by an ominous hooded figure, quickly revealed to be Euron. We learn that while Balon has gotten old, Euron doesn't appear to have aged at all. It also quickly becomes clear that there is no love lost between the brothers, a fact punctuated when Euron tips Balon off the side of the rickety bridge and Balon dies. Welcome to Westeros.

At Balon's funeral, Yara makes the usual promise that she will personally see to it that who ever did this will suffer and assumed she'd take over the throne, but she's stopped by Aeron Greyjoy who informs her she's not queen of the Iron Islands yet. They must have a kingsmoot to determine the King, according to tradition. "Maybe you'll win," he says to Yara, highly suggesting he doesn't at all think she will win.

So what's a kingsmoot? It turns out, that for all of their apparent barbarism, the Ironborn are actually ruled according to democracy. When a king dies, a kingsmoot — what we would call an election — is held. According to the books, a great meeting is held, and all candidates must proclaim their platform, with their version of a stump speech, and the Ironborn vote on who they want to be king. In the books, Yara (known there as Asha) musters more support than expected, for the Ironborn have never been ruled by a woman before. But in the face of her eloquence and obvious qualifications, this doesn't seem to matter much. She is matched in support only by her uncle, Victarion. The character of Victarion doesn't look like he'll be making an appearance in the show, but it's quite likely that Yara will have to face off to her uncle Euron instead.

But will she win? It's anyone's guess.