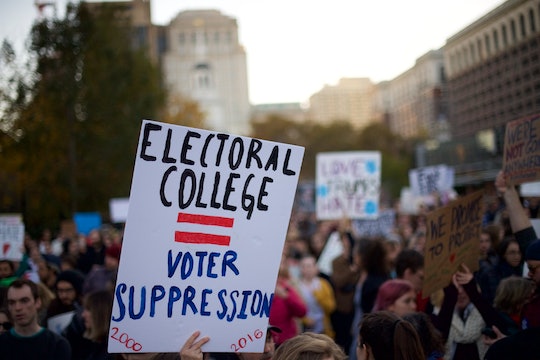 Who Will The Faithless Electors Vote For? John Kasich & Colin Powell Are Possibilities

Attempts to bar President-elect Donald Trump from entering office have been, up until now, relatively futile. Jill Stein's recounts left much to be desired for anti-Trump activists, who've now turned to the Electoral College's imminent vote as a last resort. On Dec. 19, electors can choose to vote in accordance with their state's results, or choose another candidate entirely. But who will the "faithless electors" vote for?

As of now, only one elector has voiced his dissent from Trump. Republican Christopher Suprin wrote an op-ed for The New York Times, entitled "Why I Will Not Cast My Electoral Vote for Donald Trump," in which he explained his decision, concluding: "I believe electors should unify behind a Republican alternative, an honorable and qualified man or woman such as Gov. John Kasich of Ohio." This, Suprin writes, is "the right thing for the good of the country."

For his part, Kasich doesn't think it's such a great idea. "I am not a candidate for president and ask that electors not vote for me when they gather later this month," he wrote in a statement posted to Twitter earlier this month.

In order for Suprin's vote to be significant, he needs other electors to side with him; 37 electors must withdraw their support from Trump in order to reduce Trump's support to less than 270 electoral votes. In the event that neither candidate gets 270 votes, the decision would be voted on by the House of Representatives. None of this disqualifies Trump from the presidency, but it does make it a bit harder.

A recent claim by a Harvard University law professor that 20 Trump electors might change their votes is exciting the anti-Trump camp. According to Bloomberg Politics, the electors "have mentioned former Secretary of State Colin Powell, former Utah Governor Jon Huntsman and Ohio Governor John Kasich as potential alternatives" to Trump.

The Washington Post warns that this amount of supposedly existent faithless electors, however unlikely, still isn't enough to take the presidency away from Trump. Though three electors in addition to Suprin have mentioned a desire to waver from Trump, one of those electors retracted her statements and the two others decided to resign from the Electoral College completely.

For 37 electors to switch their support from Trump to another candidate would be nothing short of an unprecedented revolution — one that, at present, has very little steam behind it. Crazier things have happened in politics, like, say, a candidate winning the popular vote by 2.8 million and still not securing the presidency, so stopping Trump by faithless electors remains a possibility, albeit an improbable one.