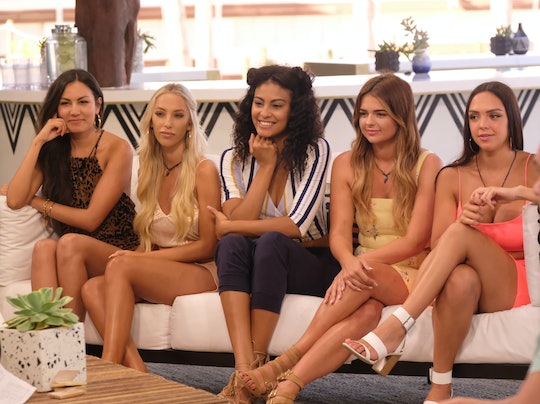 'Paradise Hotel' Is A Beachside Race To Romance

Fox's Paradise Hotel is like a more stressful version of Bachelor in Paradise, without the pool of familiar contestants returning from previous shows and looking for someone to maybe marry. In this beachside race to romance, a group of singles are brought to a tropical resort where they couple up in order to win money at the end. But who will win Paradise Hotel?

Unlike its brethren in beach romance Bachelor in Paradise, the Paradise Hotel competitors aren't necessarily making an attempt to find genuine romance. Obviously that would be a plus, but it's also about contestants using their smarts and game-playing skills to make it to the end. There were 11 contestants when the show began, which meant there would always be an odd person out when it came to pairing up. (I assume throuples don't fly in this situation.) For every person kicked out, someone else is brought in, so the numbers are always uneven.

It's impossible to predict how this show will shake out with any amount of certainty. The fact that there's always a new variable thrown into every episode makes figuring out the winner even more difficult. Everything could change at a moment's notice, so no one is safe for long.

Another thing that makes the finale of Paradise Hotel difficult to predict is that there just isn't much viewer investment. It hasn't worked Twitter up into a frenzy debating the merits of one suitor over another; there are no Reddit theories that try to determine who will take home all that sweet, sweet cash at the end. Interest in the show seemed to dissipate fairly quickly, which was reflected in the ratings. According to The Wrap, the premiere drew 1.4 million viewers and a 0.5 rating/2 share among adults aged 18 to 49.

That resulted in the show being sort of cancelled. How does one get sort of cancelled, you might wonder? Well, Paradise Hotel started off airing multiple days a week before being pared down to just Thursday nights on Fox. It will wrap up on Jun. 6 and likely won't be back for another season. But despite the crickets in the audience, the show does have a gaggle of dedicated viewers who pop up on the official Twitter page to bemoan its missing episodes and rail against reigning power couple Rosanna and Tyler.

Rosanna and Tyler might be dealt a serious blow when his ex-girlfriend Shaylie joins the cast. In a clip on Twitter, she reveals that she spent the night at Tyler's house right before he left to film the show. That may cause some cracks in Rosanna and Tyler's burgeoning relationship and hurt their chances in the grand finale. Producer SallyAnn Salsano has one bit of advice for everyone on the show, however. While talking to Us Weekly, she said, "If you're coming here, and you're not looking for love, you have no chance of winning and no chance for the money."

Predicting the winner of Paradise Hotel might not be easy, but based on Salsano's advice, you can try rooting for the couple who seem to honestly have feelings for each other.