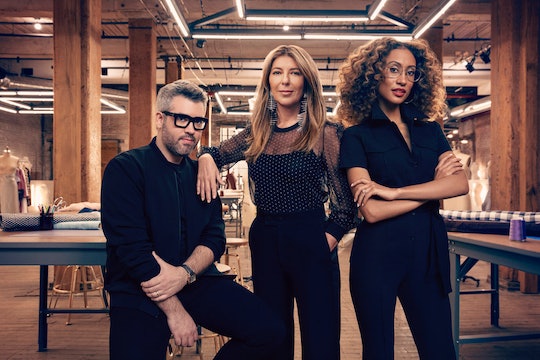 The Competition Is Tough On 'Project Runway' Season 17

On Mar. 14, a brand new season of Project Runway is launching on Bravo. There will be 16 new designers making their mark by whipping up incredible creations at a moment's notice. And getting to know them ahead of the Season 17 premiere may give viewers better insight on who makes it all the way to the end. It might be too early to know who wins Project Runway Season 17, but it's definitely not too early to speculate.

It's difficult to get a sense of the contestants' work before seeing them in the workroom. But their names have all been released by Bravo, as well short blurbs about their background and style that could help reveal what to expect from them. It's impossible to know who the winner is before the season kicks into gear but some designers might already stand out from the crowd.

The prize is especially thrilling this year, too. The winner of Project Runway Season 17 will earn a whopping $250,000, plus a feature in Elle and a featured role in a Bluprint digital series. It doesn't stop there, either: they also get an additional $50k to put towards their own design studio. They'll even receive a mentorship from the Council of Fashion Designers of America. But who could be the lucky recipient of all those riches?

It could be anyone. The designer bios shared by Tom and Lorenzo showcase a wide variety of styles and perspectives. Many of these designers are already very accomplished, with lines of their own and impressive celebrity clients. If fashion pedigree was all it took to win, then quite a lot of these designers would make it to the top. Afa Ah Loo has designed for The Commonwealth Fashion Exchange and displayed a look at Buckingham Palace. Rakan Shams Aldeen, Tessa Clark, Renee Hill, and Nadine Ralliford all have their own brands. Sebastian Grey owned several stores in Cali and Medellin in Colombia.

Still others have experience dressing famous clients. Cavanagh Baker has worked with the Project Runway queen herself, Heidi Klum. Bishme Cromartie, meanwhile, has dressed Andra Day, Mel B, and Niecy Nash — after landing his first fashion show at age 16. Venny Etienne, a graduate of the Paris American Academy, can list Cardi B and Michelle Williams among his clients. Gary Sparo has dressed Madonna and Daphne Guinness, two formidable fashion powerhouses.

Sonia Kasparian's work has a sportier flair. Per Tom and Lorenzo, she's worked with Nike and designed apparel for the NBA and the USA Olympic Team. Kovid Kapoor grew up all over India before moving to the United States, where he learned a whole new kind of fashion; that adaptability would be a huge asset on Project Runway.

Frankie Lewis is inclusive in her work, making sure her clothes suit women of every size and shape. Lela Orr focuses on exo-luxury, which means her designs are cruelty-free and produce zero waste. Meanwhile, Jamall Osterholm and Hester Sunshine have distinct aesthetics that may be unique among their peers: he seeks to create futuristic looks that take inspiration from the past, while her work is colorful and fun.

These 16 designers might be relatively unknown, but they're far from unskilled. They all have experience that could give them a boost in the competition, or help them create eye-catching looks. Frankie Lewis' ability to dress all sizes may help her excel thanks to the show's inclusive models. Those with practical knowledge of celebrity clients may be able to meet whatever challenge is thrown their way.

Viewers may not know who the winner of Project Runway Season 17 is yet, but it's clear that the competition is going to be especially tight this year.