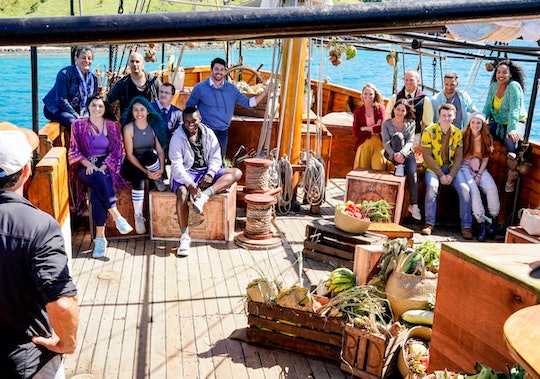 Survivor is back for an all-new, twist-filled season on Feb. 20 dubbed Edge of Extinction. The franchise promises one massive twist, plus some smaller ones along the way, and its new approach will inform who wins Survivor Season 38 in a big way. If you're a fan of Bravo's Top Chef, then Edge of Extinction's plot twist will sound familiar. Much like Top Chef's Last Chance Kitchen, Survivor will offer its eliminated contestants a chance to get back into the game, with a few caveats.

They'll be able to focus fully on surviving the elements and keeping their wits about them while fellow competitors try to encourage them to quit. Extinction Islanders will have two chances to try and get back into the game via a merger, but those still in the main game will have no idea that a redemption contingency plan is in play. Players will only learn Extinction Island's existence once they, themselves, are eliminated.

Another factor in determining this season's winner is that four of the contestants this season are veterans of the game. Joe Anglim previously appeared on Worlds Apart and Cambodia, Aubrey Bracco appeared on Kaôh Rōng and Game Changers, Kelley Wentworth appeared on San Juan del Sur and Cambodia, and David Wright appeared on Millennials vs. Gen X. Obviously, having played once before gives this foursome a sense of the physical toll as well as the strategic gameplay involved.

It's a huge leg up for Joe, Aubrey, Kelley, and David, and that advantage is reflected in Gold Derby's predictions for who takes the million-dollar prize at the end of the season. A site that analyzes predictions from leading entertainment media experts, Gold Derby offers data-driven odds-on favorites to win everything from awards shows to reality competition shows like Survivor. And according to Gold Derby, Kelley Wentworth and Joe Anglim are the number one and two most likely contestants to win Season 38.

However, since Survivor's winner is chosen by a jury of that season's contestants, underdogs are often winners on Survivor, and being game veterans could mean that the four returning contestants have targets on their back instead. Other Gold Derby analysis suggests that Aubrey shouldn't be discounted as a favorite to win precisely because she's come so close in seasons past — she was the runner up on Kaôh Rōng and made it to Day 37 on Game Changers. There's definitely an argument to be made that she's the hungriest, most determined player this season, and her castmates may find her to be the most deserving if she makes it to the final two. Of course, it's always possible that a wildcard newbie will show up the veterans and claim the title of Sole Survivor for themselves. Fans can get a better sense of this season's favorites when Survivor premieres on Feb. 20.