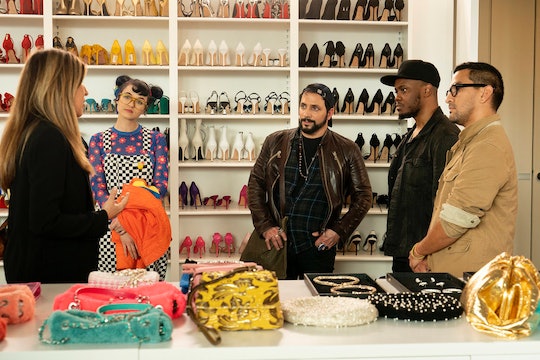 'Project Runway' Crowns Its Winner In The Season 17 Finale

There are four finalists left on Project Runway, but with tonight’s season finale, fans will finally get to see who takes home the coveted win. It’s been a colorful and creative season so far, and the competition is getting fierce as the finalists come into the home stretch. It might be too early to know who won Project Runway, but fans are taking to Twitter to predict who they think will emerge as the victor.

In last week’s episode, the final four designers — Bishme Cromartie, Gary "Garo Sparo" Spampinato, Sebastian Grey and Hester Sunshine — were sent home to create and complete their 10 piece collections. But things won’t be as easy as they think. According to Bravo’s synopsis of the finale, the designers will be thrown into a frenzy when they get a surprise assignment.

“The remaining designers arrive at a new work space to unpack their collections and learn their final challenge,” reads the network description of the episode. “Nina Garcia meets them at the Elle Magazine offices and the designers are sent spiraling when tasked with a surprise eleventh look. In the end, only three of them will move on to compete in the finale.”

After an entire season of overcoming the zaniest fashion challenges, I can’t see this eleventh look becoming too much of a problem for these skilled and talented designers. But timing is everything, and if they’re already cutting it close with their primary 10 looks, they may not have enough time to put together one more.

In Bravo’s trailers for the finale, you’ll see some of the other challenges the designers will face before the final runway show. In one clip, Hester painfully sews through her fingernail and finger while talking to Bishme in the workroom. Luckily, the injury is not too bad, but it does add to the stress Hester’s already feeling. “I was trying so hard to hold it all together,” she says in the clip. “I’ve been like a wreck, but I have this amazing collection, I have so much to work for, and it’s like crashing down in waves."

In another clip, Christian Siriano is concerned about how slowly Bishme is working, noting that he has only one complete look out of 10, with only two months left to finish. “Bishme has a lot to do actually,” Siriano says in the video. “I was a bit surprised. He has a lot of ideas and he’s sketching a lot, but there’s no physical work being done.”

But Project Runway fans have total faith in the final four, and many are already taking to Twitter to predict who they think will win. So far, Sebastian seems to be a frontrunner among fans:

Some fans are torn between Bishme and Sebastian:

One Bishme fan predicted that Hester would win, but only because her designs were so eclectic:

Garo is a talented designer who could potentially win, but because he already has an established brand, some viewers think the show should give another designer the opportunity to shine.

Well, soon enough, fans will get to see the designers present their final collections and find out who ends up as the Season 17 winner of Project Runway.