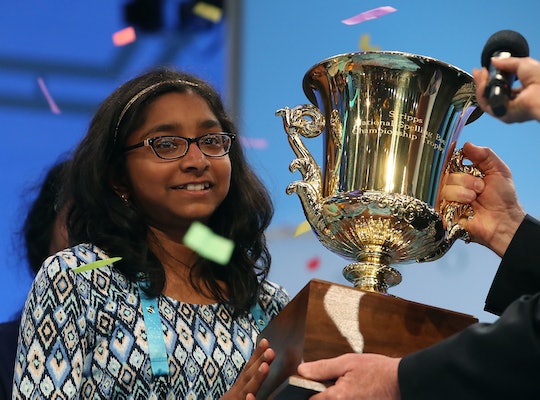 The finals for the 2017 Scripps National Spelling Bee on Thursday night had a tiebreaker procedure waiting in the wings, following three consecutive tied-game years. But the event ended with a solo winner on Thursday. Who won the 2017 Scripps National Spelling Bee? Her name is Ananya Vinay, and she's a 12-year-old from Fresno, California. What were you doing at 12 years old? I mean, I was in spelling bees once upon a time, too, but nothing like the national competition Vinay took home the trophy for on Thursday.

Newsweek reported that Vinay went up against 14-year-old fellow finalist Rohan Rajeev, and that they each spelled heiligenschein, durchkomponiert, and sceloporus correctly throughout the course of 21 "championship rounds" before they got to the final word. That word was "marocain," which is reportedly a dress fabric of ribbed crêpe. Just before, Rajeev failed to spell the Scandinavian word “marram” during his turn, and when Ananya spelled two words in a row correctly, she became the big winner of the competition.

According to NPR, Thursday night's finals in Oxon Hill, Maryland, included a written, 24-question test that all finalists had to take Thursday. If finalists in the competition had gone through the whole list of prepared words for the finals without a clear winner, the results of that test would've been used as a tiebreaker — avoiding the possibility of the event ending in a tie as it did in 2014, 2015 and 2016. But Vinay won without needing the tiebreaker option.

The Los Angeles Times reported that the National Spelling Bee had 291 spellers, and that the top 40 spellers advanced to Thursday's finals. So Vinay won first prize out of almost 300 possible placements, and that's not including any competitions that weeded out those 291 competitive spellers in the first place. And yet, here I am, making sure I don't have any typos in my tweets.

After she won the competition, Vinay reportedly told CNN:

It's a like a dream come true. I am so happy right now.

And she should be. Winning the Scripps National Spelling Bee is a huge deal. CNN reported that she's the winner of a $40,000 grand prize — can you say "jackpot"? Or rather, spell it?

Plus, SB Nation reported that Vinay will also receive an engraved trophy, a $2,500 U.S. savings bond, a trip to New York City to appear on the LIVE with Kelly and Ryan show, and a complete reference library from Merriam-Webster. That last one sounds like a spelling nerd's dream come true, but the rest of the prizes are pretty great too.

The other competitors get some bragging rights too. Rajeev will receive $30,000 for his second place win, and NPR reported that a kindergartner from Tulsa, Oklahoma, Edith Fuller, was the youngest contestant ever to make it to the on-stage rounds of the event. The Los Angeles Times confirmed that she is 6 years old. Think about that for a minute. Do you know many 6-year-olds who can spell "nyctinasty"?

The 90th National Spelling Bee was broadcast on ESPN, with plenty of viewers watching at home and cheering on their favorites. Vinay definitely had her fans on social media, who rooted for her just as much as others do for their favorite sports team or athlete.

NPR reported that Vinay was the youngest finalist, and that "she barely reacted to her victory before she was bear-hugged by her father, who had sprinted onto the stage." But, according to SB Nation, when she was officially announced the winner, she burst into tears.

So what's Vinay going to do with her winnings? According to ABC News, she plans to put some of the money into an account for college. Smart girl.