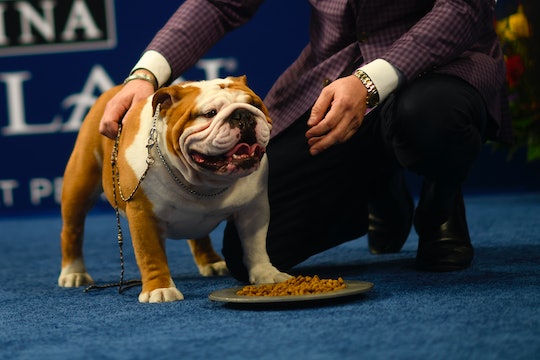 Thanksgiving isn't just about eating delicious food and catching up with loved ones if you tune into this annual show on NBC. And no, I'm not talking about the Macy's Thanksgiving Day Parade. I'm referring to a little thing called the National Dog Show. The competition crowns one deserving pup every year, with Whiskey the Whippet reigning supreme in 2018. As for who won the 2019 National Dog Show? The honor was bestowed upon an especially adorable pup, Thor the bulldog.

Thousands of dogs, along with their doting owners, entered the 18th Annual National Dog Show presented by Purina for a chance to win "Best in Show." Of course, judging 185 different breeds isn't easy, especially when all of them are deserving of a bone. But the tough call had to be made, which is based on "how closely each dog compares with the judge’s mental image of the perfect dog as described in the breed’s official standard," according to event's website.

The dog who fit this bill on Thursday was none other than Thor, who belongs to owner Eduardo Paris, according to NBC Sports. “He’s a dog that always gives everything for me,” Paris told the outlet.

To achieve the win, Thor beat out 2,000 dogs representing 194 breeds and varieties, first winning the Non-Sporting Group competition against 19 other breeds. "Thor won today because of his structure and because he moves so well," Paris said about his pup's prowess, according to People. "He has been showing since September 2018 and has won 27 specialties since he has been showing."

Adding to Thor's impressiveness? Many viewers were rooting for him to win the show, with one person tweeting, "YAS FINALLY BEST SHOW IS THE BULLDOG I AM CRYING. "YOU GO THOR! IT'S FINALLY THE BULLDOGS YEAR!"

"I would kick down the gates of hell for Thor (the bulldog)," someone else joked.

Taking a step back to 2018, Whiskey took home Best in Show, an honor his owner, Justin Smithey, was especially proud of. "I think [he's] an outstanding example of what the ideal whippet would look like," Smithey told NBC News. "This is our companion, our pet. He was born by my bed."

To give a little background on Whippets, they typically weigh between 25 to 40 pounds and live to about 15 years. "The sleek, sweet-faced Whippet, the 'Poor Man’s Racehorse,' is lightning quick," a description of the breed reads on the American Kennel Club's website. "He is an amiable, dignified, and gentle soul, but give him something to chase and he’s all business. The name Whippet is synonymous with streamlined grace."

Whippets must be exceptional dogs because Whiskey won the December 2018 AKC National Championship presented by Royal Canin, an event featuring around 5,000 entries. “That’s the largest show a whippet has ever won since the AKC began keeping records, Smithey told the The Atlanta Journal-Constitution.

It's unclear if Thor will go on to win future competitions like Whiskey, but if his performance at this year's National Dog Show is any indication, he's poised to do great things.