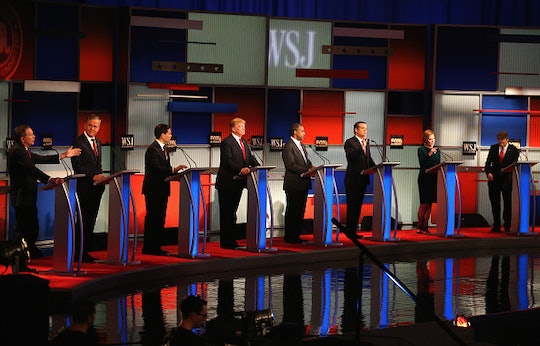 Who Won The Fourth GOP Debate? Here's How The Front-Runners Stacked Up

With the smallest field yet on the stage during the fourth GOP debate tonight, all of the candidates running for the Republican presidential nomination got their chances to make some big statements about plans for the economy. Still, to be honest, when the jabs were traded and tax plans were laid out, the big question wasn’t who has the best ideas for the economy (as important as that may be), but who won the GOP debate. Although the national polls will determine the true victor, people are already weighing in online.

Nationally, Google Trends show Ben Carson and Donald Trump were the most buzzworthy Republican candidates, although Ted Cruz and Marco Rubio also experienced spikes during the night after making their boldest statements. Then again, name searches don’t always mean good things for candidates — just consider how many people were probably searching Carson’s name after he admitted to lying about applying to West Point.

In terms of who gained the most ground with voters during the debate, the general consensus is that Rubio had the strongest night. Not only did he draw some of the loudest applause from people in the Milwaukee audience when he talked about strengthening the military, Rubio gained the second biggest amount of Twitter followers during the debate, behind Carson. As CNBC notes, that is generally a good predictor of who will experience a boost in the subsequent polls.

Others said Cruz came out looking good, especially when he said of the military, “You think defending this nation is expensive? Try not defending it. That's a lot more expensive.” That power statement, along with his applauded comments on immigration, earned him the third most Twitter followers of the night.

From another perspective, Trump and Carson could be considered winners of the debate because they weren’t losers. Although it wasn’t a particularly exciting night for either, they also didn’t make any big gaffes, which means they will probably be able to maintain their sizable leads on the other candidates — even if it won’t do much for making either of them the clear frontrunner.

Polls and statistics aside, those weighing in on Twitter had strong opinions of their own about who was the champ of the fourth GOP debate — and the verdict wasn’t nearly as clear there.

As the debate about the debate continues, we’ll just have to wait and see who really comes out on top when the next round of national polls are released. After that, the challenge for the candidates will be keeping the momentum going until the next GOP debate on December 15.