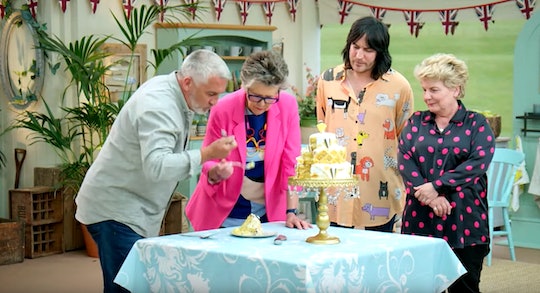 American baking fans are jumpin in to the latest season of The Great British Baking Show on Netflix, and so far, the series is certainly delivering on the fun. Through a variety of delicious challenges, thirteen bakers are competing to win the ultimate culinary title. The competition is fierce this time around, and many fans are wondering who won The Great British Baking Show Season 7.

The season finale has yet to air, so there’s no way to confirm or even predict the name of Season 7’s winner. Unlike previous seasons — which came to Netflix as complete seasons after their respective finales aired on UK"s Channel 4 — this time around, Netflix audiences are watching the show alongside British audiences week-to-week. This season will air with a total of 10 episodes, and according to Netflix, the finale won’t drop until sometime in November. That means fans will just have to wait a few more weeks to learn the final result.

In the meantime, viewers can enjoy the competition and root for who they think is worthy of the title. As detailed by the show’s website, Season 7 contestants include Phil Thorne, an HGV driver who loves motorcycles; Alice Fevronia, a geography teacher from London; Michael Chakraverty, a fitness instructor and theater manager; Henry Bird, a college student who studies English literature; Rosie Brandreth-Poynter, a veterinary surgeon who loves animals; and Priya O'Shea, a marketing consultant who enjoys vegan baking.

The cast is rounded out with Helena Garcia, a project manager from Leeds; Michelle Evans-Fecci, a print shop administrator who grows her own veggies; David Atherton, an international health advisor who likes baking bread; Jamie Finn, a waiter who wants to study sports science; Amelia Le Bruin, a sportswear designer who’s been baking for 19 years; Dan Chambers, a support worker whose father was a chef in the army; and Steph Blackwell, a shop assistant who learned how to bake from her grandfather.

Season 7 started with “Cake Week,” in which Dan had to say goodbye when his pirate waterfall cake fell just a little short on taste. In Episode 2, titled “Biscuit Week,” Jamie’s clumsy execution of a guitar biscuit sent him home. And in the exciting “Bread Week” challenge of Episode 3, Amelia was eliminated for her pretty, but undercooked loaves.

There are more challenges ahead, including the next two episodes, “Dairy Week” and "Roaring 20s Week.” As contestants are eliminated, the competition will get tougher, but once the winner is crowned, it will be completely worth it. Past series winners have gone on to pursue lucrative culinary careers, including 2015 winner Nadiya Hussain, who went on to become a successful cookbook author, and along with appearing on numerous TV shows, she was asked to bake Queen Elizabeth’s 90th birthday cake. It’s too early to tell who will win this season, but it’s safe to assume whoever wins will have more than just the title of victor to celebrate.

Season 7 of The Great British Baking Show is currently streaming on Netflix.