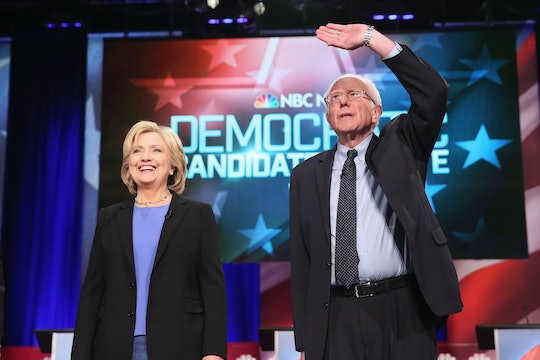 Who Won The Iowa Caucus? It Was One Of The Closest Races In History

After months of build-up filled with highly unusual political moves by candidates in both the Republican and Democratic parties, the 2016 presidential election season officially kicked off in Iowa Monday. Who won the Iowa caucuses Monday night? In the first real look at who the voters favor, Republican Texas Sen. Ted Cruz and Democratic former Secretary of State Hillary Clinton said they won the Iowa caucuses, though Clinton tied with Vermont Sen. Bernie Sanders and only won after a coin toss, according to the Independent. That not only gives the candidates good publicity, but also an early lead in the contest for delegate voters.

Cruz and Clinton's wins, however, don't mean the rest of the candidates should be counted out: As Yahoo! Politics explained, Iowa delegates are appointed to each candidate in proportion to the voters — in contrast to other states that award all the delegates to the sole winner. On top of that, this is just the very start of the primary season. As such, anything is still possible. According to NPR, four Republican winners and two Democratic winners at the Iowa caucuses from the past 40 years did not go on to earn their party's nomination for president. On the other hand, Ronald Reagan, George H.W. Bush, and Bill Clinton all lost in Iowa before going on to win the whole election.

And, additionally, Clinton's "win" only happened because of a coin toss, which is used in the rare event of a tie at the caucus, according to the Independent. According to CBS News, Clinton was awarded 699.57 Iowa state delegates, and Sanders was awarded 695.49.

Nonetheless, the results from the Iowa caucuses meant celebrations for the Cruz and Clinton camps (even if Clinton's was ever so small). Speaking to his supporters on Monday night, Cruz victoriously declared, "Tonight is a victory for courageous conservatives." Although she spoke before the caucuses were officially called, Clinton seemed confident.

I am a progressive who gets things done for people. I am honored to stand in the long line of American reformers who make up our minds that the status quo is not good enough. That standing still is not an option. And that brings people together to find ways forward that will improve the lives of Americans.

Meanwhile, the trailing candidates said they were determined to keep up the fight. Donald Trump, who led the Iowa polls going into the caucuses, said he was "honored" to finish second. But, CNN reported that he told supporters, "We will go on to get the Republican nomination and we will go on to easily beat Hillary or Bernie." After earning a respectable estimated 23 percent of the vote, Florida Sen. Marco Rubio also seemed positive, telling his supporters, "This is the moment they said would never happen. For months, they told us we had no chance."

On the other side, Sanders, who virtually tied with Clinton for the first time in Iowa caucus history, according to the Democratic Party's leader Monday night, also seemed to also consider the day a victory — and for good reason. "It looks like we are in a virtual tie," Sanders said in a speech to his Iowa supporters before outlets called the winner. "And while the results are still not complete, it looks like we'll have about half of the Iowa delegates."

For now, Cruz and Clinton should enjoy their nights — before turning their attention to next week's New Hampshire primaries tomorrow.