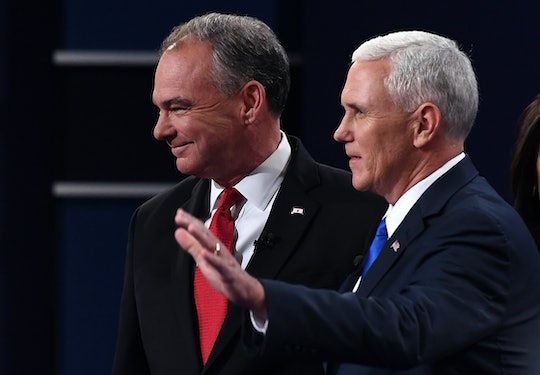 Who Won The Vice Presidential Debate? Kaine Stuck To The Issues

With fewer interruptions and (sadly) less shimmying, Tuesday night's debate was a calm contrast to the first presidential debate the week prior. Democratic nominee Sen. Tim Kaine and Republican nominee Gov. Mike Pence spent 90 minutes discussing some bits of policy, but the majority of conversation centered around protecting their running mates while lashing out at the other's. So who won the vice presidential debate? Though the GOP prematurely released that Pence won—prior to the debate even began—it was Kaine who managed to answer the topics presented, focusing on the issues and questions asked rather than getting caught up in tangents.

More Like This
If A Tick's Head Gets Stuck When You're Pulling It Out, Here's What To Do
Wait, Did The Government Actually Do Something For Parents?
Bindi Irwin Has Been Sharing The Cutest Photos Of Her Daughter
Everything You Need To Know About The Proud Family Reboot Coming To Disney+

The vice presidential debate began with moderator Elaine Quijano following the same format that the presidential debate followed. Uninterrupted by commercials, the debate consisted of nine 10-minute sections, each of which began with Quijano's question, and allowed two minutes each for Kaine's and Pence's responses. The remainder of the 10 minutes was left for debate between both parties. The presidential debate allowed 15 minutes per each of the six sections so, by contrast, the topics moved a lot more swiftly this time around.

Ultimately, the candidates spent the majority of the debate talking over one another, thus making it difficult for listeners to parse policy from the excess. In terms of factual accuracy, which was an important focus for Trump and Clinton debate viewers, the candidates constantly challenged one another's legitimacy. NPR's fact checking revealed that Pence was less truthful than Kaine, as Pence continuously asserted that Clinton and Kaine, in comparison with Trump, are running a more insult-ridden campaign. In analyzing the barrage of negative tweets that Trump showers on a daily basis, this is simply not true.

In the coming days, various surveys will ultimately decide who the general public and political analysts believe came out on top. Both candidates managed to criticize their opponents thoroughly, but neither really received the direct answers that they were seeking, with Kaine in regards to Trump's taxes and Pence in reference to Clinton's e-mails. Ultimately, Kaine managed to focus on the issues while Pence attempted to make the conversation a lot more personally combative. Similar to how Trump contested so many factual statements in the first presidential debate, Pence took a similar, victim-like stance.