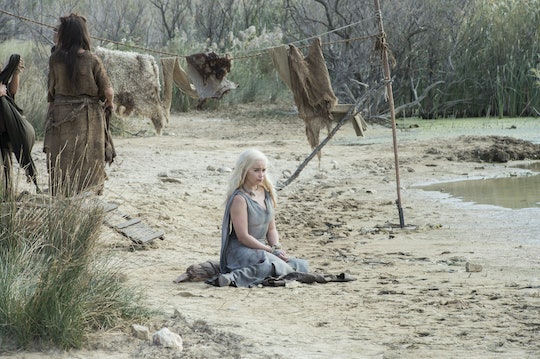 Who Wrote "Mhysa Is A Master"? 'Game Of Thrones' Returns With Threats Toward Daenerys

The freed slaves of Meereen are channeling their inner anarchists on a bit of a No Gods/No Masters kick on Game of Thrones. As Tyrion and Varys stroll through the rubble, they find some graffiti that reads, "Kill the Masters/Mhysa is a Master." So who wrote "Mhysa is a Master"? It's a pointed threat to Daenerys.

Mhysa, which means mother in Valyrian, is clearly in reference to Daenerys, Mother of Dragons, who has risen to power in Meereen and, in the process, completely upended its social structure. She's freed all the slaves and sentenced the masters to death, but the subsequent lack of hierarchy has triggered mass hysteria.

Varys asks Tyrion who wrote the graffiti, and Tyrion admits that he doesn't know. "Our queen is not as popular in Meereen as she used to be," he sadly remarks.

Varys suggests that the culprits might be the Sons of the Harpy, who waged an attack on Daenerys at the fighting pits. Or it could be the masters who became enraged when she, as Tyrion points out, took away their property by declaring that human beings weren't property to begin with. Or, Tyrion notes, it might be the freed slaves who did it because they feel abandoned by Daenerys, who kind of just hopped a dragon and skipped town. Basically, there are a lot of options.

Literally the entire population of Meereen has been left in a lurch by Daenerys and she seems at a loss for what kind of queen to be to them in the meantime. Away from Meereen seems like the safest place for her to be, considering the hostility that endures for her there. If only she had a way to get away...