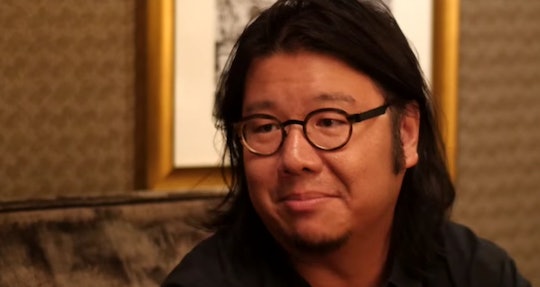 Meet The Author Behind The 'Crazy Rich Asians' Book Series

The highly-anticipated romantic comedy Crazy Rich Asians will hit theaters across the nation on Wednesday, Aug. 15. For those who haven't caught wind of this ground-breaking film, allow me to catch you up to speed. To start with, the movie is based on a 2013 book — and the movie is actually Hollywood's first studio film in 25 years to feature an all-Asian cast and to feature Asian Americans in lead roles. Pretty awesome, right? What many who are interested in the rom-com might be wondering is this: Who wrote the Crazy Rich Asians book series? Kevin Kwan based the off real-life experiences.

If case you haven't seen the movie trailer yet, let's first take a look at the story's plot, shall we? The movie, like the book, tells the story of a Chinese-American economics professor, Rachel Chu, who travels with her boyfriend, Nick Young, to Singapore to meet his family for the very first time, according to IMDB. That's when Chu learns that his family is like insanely rich, and that her boyfriend is essentially the "Prince Harry" of Asia. Sounds pretty compelling, right? I know if there's an opportunity for me to sneak out of the house for a couple of hours sans kids, this movie is on my short list of things to do.

As it turns out, the trilogy's author, Kevin Kwan, based the story — including many of the details and inspiration behind the characters — off his personal experience living among the wealthiest 1 percent of Singapore. Kwan was actually born in Singapore, and he lived there until he was 11 years old before his family moved to Houston, according to The Washington Post. “I come from an old establishment family from Singapore,” he wrote in a feature for Town & Country magazine. According to The Washington Post, Kwan's paternal grandmother was the daughter of a founding director of one of Singapore's oldest banks. And a great-uncle was a doctor who helped invent Tiger Balm. “I remember I had an aunt that lived in a house that had this beautiful ceramic wall that was entirely a painting of a peacock,” he told the publication. “There were all these beautiful scenes from my childhood that really are coated in amber.”

As Kwan told Refinery29, it was only after he moved to the U.S. when he was 11 that he realized just how different his upbringing had been. “I remember not being able to cope the first few months, he told the publication. "I came from a world where there were so many people around the house that did everything. The thought of washing a dish and mowing the lawn was unfathomable. Then, my American cousin sat me down, and he said, ‘Shame on you. You need to help your mother with the housework. Don’t you know what she’s going through?’ Everyone knew that she was learning to adapt to a whole new world.” He continued:

In normalizing to American life, I’d look back at my life in Singapore and go, 'Huh — that was kind of odd.' There I was, every Sunday, having brunch with a princess from Thailand. I don’t think many kids get to do that. I’d tell friends these stories, and of course they thought I was bullsh*tting.

I have a feeling it's Kwan's inside perspective about how the top 1 percent lives in Singapore that makes his book and the film work so well. (Judging from the trailer, the acting looks pretty top-notch, too) And considering that at one point, critics had launched the movie's Rotten Tomatoes rating to 100 percent, according to Entertainment Weekly, I have a feeling Crazy Rich Asians is going to do pretty well at the box office. (It's currently at 98 percent, but still!) Personally, if I can't escape my three kiddos to see it on the big screen, then you can bet I'll be Red Box-ing the sh*t out of it when it's released on DVD.