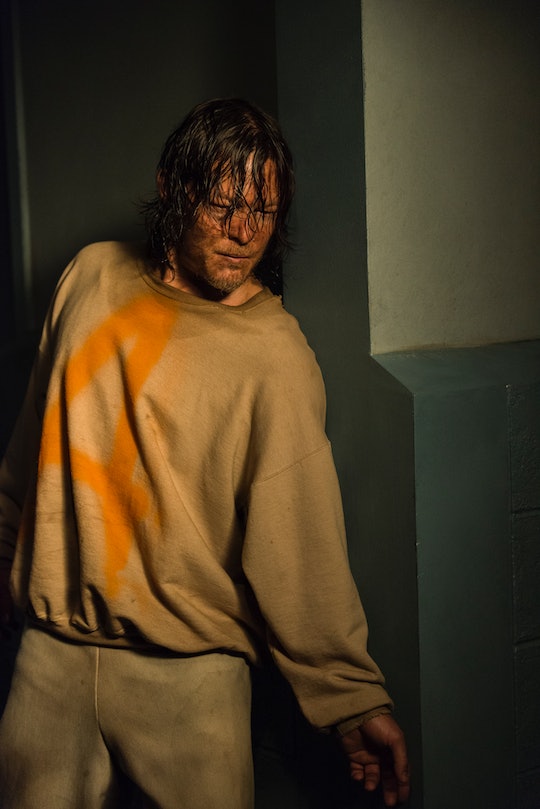 Who Wrote The Note To Daryl On 'The Walking Dead'? It Could Be A Trap

Daryl has been languishing in a Savior cell on The Walking Dead for weeks, but that may change after the events of "Sing Me a Song." For most of the episode, he continued to play the part of the good prisoner, even when he saw Carl in Negan's clutches. Though clearly worried, Daryl didn't act out, still feeling the aftereffects of his guilt over Glenn's death in the premiere. It felt hopeless for Daryl until near the end of the episode, when a key was slipped under his cell door along with a message: go now. But who wrote the note to Daryl on The Walking Dead?

There are a few possibilities, though none were confirmed in "Sing Me a Song." Shortly before the note appeared, Daryl caught sight of Jesus sneaking into the Sanctuary atop a Savior truck. He might have shown up to lend Carl a hand, but seeing that that wasn't needed (Negan helpfully gave Carl a ride home), Jesus may have decided to prison break Daryl. But what if the call was coming from inside the house? Though it may seem like Daryl has no allies inside the Sanctuary, both Dwight and Sherry have been shown to have doubts. It's possible one of them decided to help Daryl escape.

Jesus' motives would be the easiest to understand. He's one of the good guys, and he's built a relationship with Alexandria and the people who live there. If he saw Daryl was in trouble, then it would make sense for Jesus to try and help. He's also got the impressive skulking skills to pull off such a feat. If he could get himself in and out of Michonne and Rick's bedroom all the time in Alexandria, he could certainly slip a key to Daryl. However, it would probably make more sense for Jesus to break Daryl out himself and help him escape the grounds; the key implied a level of secrecy that may have come from someone on the inside.

Both Dwight and Sherry have struggled with their positions in Negan's new world order. They're both coping as well as they can, which sometimes means they aren't coping well at all. It would be plausible for either of them to have had a change of heart if they've become truly fed up with Negan. The downside is that Dwight appeared more interested in taking out his frustrations on Daryl than helping him, and Sherry spent most of the episode maintaining the status quo instead of shaking things up for the greater good.

That means the entire thing could be one big trap. Negan loves mind games more than anything else, and he may have set up Daryl's "escape" to test him. If Daryl attempts it, then he might be caught and punished more severely in a continued effort to break his spirit. If he stays put, then it will prove that Negan has won: he's broken Daryl.

But there's no way to know for sure whether the note was a trap or not; right now, it feels like the only moment of hope Daryl has had in a long time.