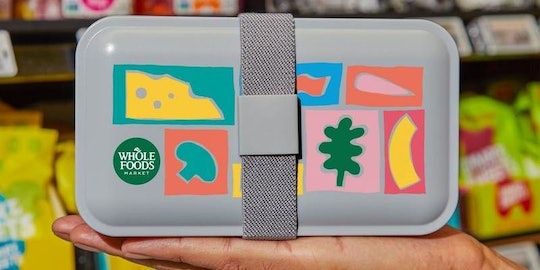 You might get a little something extra in your grocery shopping this week, thanks to Whole Foods Market's "Level Up Your Lunch" event. Whole Foods shoppers can grab a free bento box along with a $10 gift card within just by showing up to the store this weekend, as part of a larger company campaign intending to inspire lunchtime ingenuity. But supplies are limited, so you have to act fast to get in on the fun.

Level Up Your Lunch will be a limited give away event, rewarding the strong and mighty willing to wake up early on a weekend morning. The first 200 shoppers who come to participating locations on Saturday August 24, 2019 between 8 and 9 a.m. local time at each store will get a free limited edition bento box. Level Up will only run in these eight cities and locations, and fingers crossed one isn't too far from you:

The boxes have been specially designed in collaboration with artist and designer Will Bryant, and they feature colorful illustrations of food to get users excited about all the different things they can place in their lunches. The boxes come with surprises inside too: a recipe card "with tips and tricks for making creative, healthy lunches" and a $10 Whole Foods gift card, as a company press release reports. Check out the box for yourself.

You've likely already purchased your kid's lunch box for the year, but you could use it for yourself instead of eating out every day at the office. And it's handy to have extra containers around either way. The Level Up Your Lunch events are part of a larger Whole Foods' campaign to "help consumers embrace better routines and rescue them from boring desk lunches," per the same press release. The give away is the biggest aspect of the campaign, but they also have recommendations for creative school and office lunches on the site to help families.

The easiest way to get a box is to show up in-store, but don't despair if your city isn't included. You still have a chance to win one of the boxes via social media if you really want one. The grocery store is giving away 50 additional bento boxes, which will be distributed via an Instagram giveaway for those who either don't live near a participating store or press snooze one too many times on the day of the event. To be eligible to win, you have to follow Whole Foods on Instagram, and then respond to a prompt posted on the page between August 26 and September 1. Winners will be announced September 9. The Whole Foods Instagram is the best place to go for updates on the give away.

Keep in mind that each store will only have 200 boxes on hand, so you might need to line up before 8 a.m. if you want to be one of the lucky winners. If you don't end up scoring one, there's always Instagram.