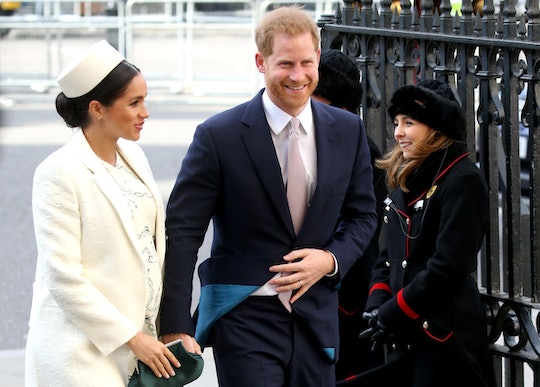 The countdown is officially on. No, I'm not talking about how many weeks of school are left until summer break. (Although, that too.) I'm talking about the fact that Meghan Markle and Prince Harry could be welcoming their first child literally any day now. Eeek! No one knows for sure when the Duchess of Sussex's due date is. But one thing is clear: Royal baby fever is alive and well. Because apparently Whole Foods is offering a Royal Addition Cheese once baby Sussex arrives.

According to Delish, the grocery store chain will release a limited-edition cheese in honor of the new royal baby's arrival. The cheese was made in Southwest England and is formally known as "Westminster Royal Mark red cheddar cheese." As Us Weekly reported, the taste of the Royal Addition cheese can be described as a combination of a "slight pleasant tanginess and a creamy texture, with flavor notes of burnt caramel and a slightly sweet and nutty finish, to create a world-class taste, worthy of royalty." (Well, thanks. Now I'm seriously craving cheese.)

Taking the royal tribute even further, it uses tropical fruit pulp in order to achieve its deep orange color — serving as an ode to Prince Harry’s hair. Seriously, how perfect is that?

Apparently, Whole Foods decided on cheddar to honor the royal baby because it's so popular in both the U.S. and the UK. “This rustic English cheese embodies the cultures of both the Duke and Duchess — just like the royal baby!” the company said, according to Us Weekly. The cheese will be exclusively sold at select Whole Foods Market locations across the nation, according to Food & Wine. (Although it won't be available in the Rocky Mountain region.) You can expect to pay between $9.99 and $12.99 per pound, depending on the location.

When can cheese lovers expect to start finding the Royal Addition cheese at Whole Foods, you ask? Us Weekly reported that limited quantities of the cheese are set to be timed to the birth of the new royal baby. So the Royal Addition cheese probably won't be shitting store shelves until the little prince or princess arrives. According to Meghan Markle, the royal baby is due in late April or early May, So any day now, basically.

It's worth nothing Whole Foods has celebrated royal babies in the past with cheese — with the birth of Prince Louis in 2018 and the birth of Prince George in 2012. (For some reason, Princess Charlotte was left out of the celebratory cheese. What's with that?)

Another company getting in on the royal baby hype is Pure Leaf. As Today reported, babies born on the same day as Prince Harry and Meghan Markle's baby will have a chance to win $10,000. The brand announced that it will be giving away 10 photo sessions plus $10 grand to one family, to be used for the infant's education. All you have to do is post a birth announcement via Instagram or Twitter and tag @PureLeaf and #PureLeafRoyalTEASweepstakes.

So the next time you're at Whole Foods, go ahead and stock up on some wine to pair with your Royal Addition cheese. Because the countdown to baby Sussex — and some delicious-sounding cheese — is officially on!