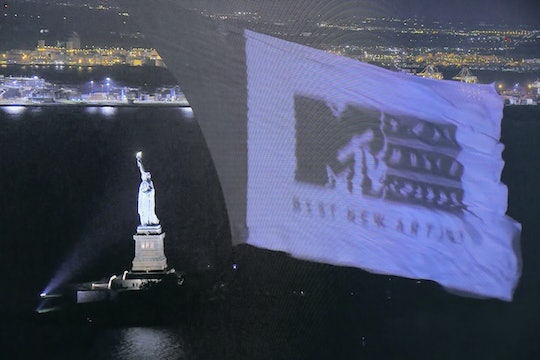 Who's Hosting The 2016 VMAs? Things Might Be A Little Different This Year

Among all of the rumors of performances and different nominations for the 2016 VMAs Sunday night, there is still one aspect of the show that remains unclear. That would be, who is hosting the 2016 VMAs? As of right now, no one has been officially announced and instead all of the VMAs promos have been about the most anticipated performances this year and the nominees to look forward to this year. So that has left plenty of fans wondering who will host the 2016 VMAs and if it's no one, what that might mean for the show overall.

If you remember, the 2014 VMAs had no main host for the show and as a whole, it went fine. Nothing blew up, no one was any less of a celebrity because they didn't have an A-lister at the helm of the show, and things progressed in a pretty natural way. Then again, in the past there have been some pretty amazing VMAs hosts like Russell Brand, Chelsea Handler, and Kevin Hart, but it looks like this year, the VMAs might not have a host at all. That, or MTV is keeping the identity of the host extremely under wraps for whatever reason.

The 2014 VMAs did have Lucy Hale and Sway as the pre-show hosts, similar to this year’s VMAs which will have DJ Khalid as one of the VMAs pre-show hosts. It wouldn’t be the worst thing in the world to not have a set host this year. Sure, we run the risk of losing the kind of comedy that a lot of previous hosts have brought in between awards and performances, but other than the initial monologue that, doesn’t amount to much time missed.

And with the VMAs, not having a host gives the artists more time on stage to shine, talk, and joke. (Sometimes, via awkward lines fed to them from the teleprompters, but still.) There is also the possibility of having comedians or actors take the stage for small bits in between performances and before award announcements, so if you’re looking for a break in the music of it all, there is always that possibility. But most importantly, the absence of an actual host for the VMAs means more time for those performances, which are really what we’re watching the show for.

Britney Spears is set to perform at the VMAs for the first time in nine years, in honor of her album dropping on Friday, August 26. There are also rumors of Beyoncé performing, which, oh my god, we could only be so lucky. And honestly, if that happens, who needs a host. They'd just get in the way.