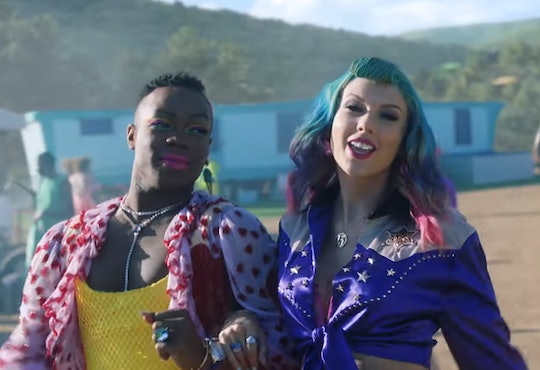 If you were looking for a celeb-packed piece of art to brighten up your day, Taylor Swift’s "You Need To Calm Down" music video will definitely do the trick. I mean, literally every celebrity you could hope for makes an appearance in this happy and upbeat song that dropped in the middle of Pride Month.

"You Need To Calm Down" is Swift’s second single off her Lover album. which is set to release on Aug. 23, according to People. And the video for her latest track released smack in the middle of Pride Month, on June 17, and is a candy-colored pop confection with a powerful message to online haters, particularly those who attack the LGBTQ+ community. Swift herself showed up at for a surprise performance at the historic LGBTQ landmark Stonewall Inn on June 14, performing a duet of “Shake It Off” with Modern Family star Jesse Tyler Ferguson, as Variety reported. So of course he's one of the many celebs to appear in the "You Need To Calm Down" music vid.

In the new video, Swift struts around a colorful trailer park enjoying time with other inhabitants, who just happen to be a who’s who of LGBTQ+ performers, activists, and supporters. For starters, dancing in front of a rainbow-colored trailer in a rainbow-colored outfit is model Dexter Mayfield. He’s joined by YouTuber Hannah Hart of My Drunk Kitchen, who's doing curls with an old-fashioned boombox.

Then Laverne Cox from Orange Is The New Black steps out of her trailer to water her pink flamingos and tosses off a wave to Chester Lockhart, who's best known for the reality show Todrick as well as RuPaul’s Drag Race.

Todrick Hall is next up, strutting alongside a rainbow-haired Swift through the park. Hall appeared in Season 9 of American Idol and as a dancer in Swift’s video for “Look What You Made Me Do.”

Singer Hayley Kiyoko gets in some target practice and bullseyes the number five. Some fans are wondering if that means that Kiyoko performs with Swift on track #5 of Lover?

As a crowd of anti-LGBTQ+ protestors march around the park, Jesse Tyler Ferguson weds his real-life husband Justin Mikita, according to Vox. As they part from their kiss, it can be seen that singer Ciara did the honors of officiating.

A tea party is next up for Tay-Tay and her guests are the Queer Eye guys — Karamo Brown, Antoni Porowski, Jonathan Van Ness, Tan France, and Bobby Berk.

Meanwhile, other residents are cooling off at a snow-cone stand run by Olympian Adam Rippon.

Ellen DeGeneres and singer Adam Lambert are hiding away inside one of the trailers, where he is giving her a tattoo of the words “cruel summer.”

As Swift and friends sunbathe in front of the protestors, Broadway’s Billy Porter walks down the line defiantly.

The whole thing ends in a riotous food fight that features perhaps the two biggest cameos. With an uncomfortable-looking Swift dressed as French fries, she calms down herself when she turns to see her former-nemesis Katy Perry dressed as a hamburger. (That’s a nod to Perry’s costume worn to the Met Gala afterparty this year.)

Between cuts of a hugging Swift and Perry pops up Ryan Reynolds, spoofing on his character in Deadpool doing a self-portrait, but this time of the interior of a trailer.

The whole party ends with a card encouraging viewers to sign a petition for the Senate to support the Equality Act on Change.org, which "would protect LGBTQ people from discrimination in their places of work, homes, schools, and other public accommodations," the petitions reads.

So go ahead and watch "You Need To Calm Down" 10 or 12 times, dance around the house, throw some food, and then sign that petition and show your support for the Equality Act.