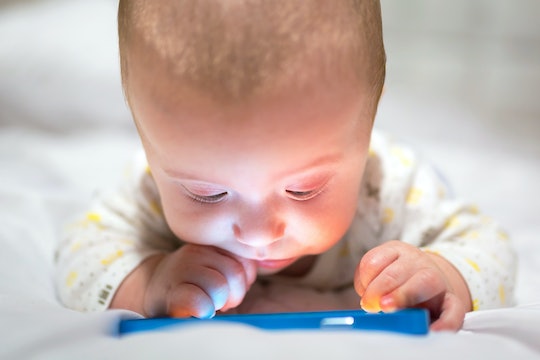 Babies Should Have No Screen Time, According To WHO's New Guidance

Many parents today are concerned about how much screen time is OK for their kids. After all, from smartphones to tablets to TVs, it's nearly impossible to avoid screens. Although these devices are very much prevalent and useful nowadays, the World Health Organization (WHO) is recommending that parents to reconsider how much time kids spent in front of screens and when to introduce them to such devices. For the first time, WHO has issued screen time guidelines for babies and for little ones under the age of 1, specifically, health experts are urging that they get none.

On Wednesday, WHO published its newest collection of guidelines for physical activity, sedentary behavior, and sleep for children under the age of 5. According to these guidelines, "screen time is not recommended" for infants younger than 1 year old. And when infants are sedentary, WHO recommends that caregivers engage in reading or storytelling with them. Additionally, WHO says that infants under 1 should not be restrained (strapped into a high chair or stroller, for instance) for more than one hour at a time.

When children turn 1 year old, WHO's guidelines for screen time and sedentary behavior are fairly similar. "For 1-year-olds, sedentary screen time (such as watching TV or videos, playing computer games) is not recommended," WHO recommends in its guidelines.

And by the time they turn 2 years old, WHO recommends that children in this age group get no more than one hour of sedentary screen time, though it noted that "less is better." Similarly with infants, when 2-year-olds are sedentary, WHO recommends "engaging in reading and storytelling with a caregiver."

Finally, for kids under 5, between 3 and 4 years old, WHO recommends they spend at least 180 minutes a day getting physical activity and says that screen time should be limited to no more than one hour.

Recent studies have shown that kids are spending more time in front of screens than ever before. For instance, a study from February 2019 published in JAMA Pediatrics found that the amount of time 2-year-olds spend in front of screens doubled between the years 1997 and 2014, according to Good Morning America. By 2014, this age group spent approximately 3.04 hours in front of a screen a day.

It's important note that tablets and phones that basically function as another computer weren't as prevalent in 1997 as they are today. And it's also important to keep this fact in mind when parents perhaps feel guilt associated with letting their kids use a tablet for 10 minutes so they can cook their dinner in peace.

Though WHO recommends less screen time is better for younger children, some parents may find relief in knowing that there is still not enough strong evidence that supports setting screen time limits, as NBC News reported. What studies have shown is that exposure to screens is changing adolescent brains, according to CBS News, but it's not quite clear what the long-term effects of exposure to screens is right now.

Knowing this, it makes sense that WHO's new guidelines on screen time are only part of a whole picture of children's health. These guidelines also call for parents to watch how much physical activity their children (and infants) are getting, as well as the amount of sleep they have in a 24-hour day.

"Achieving health for all means doing what is best for health right from the beginning of people's lives," Dr. Tedros Adhanom Ghebreyesus, the director general of WHO, sad in a statement. "Early childhood is a period of rapid development and a time when family lifestyle patterns can be adapted to boost health gains."

All parents want what's best for their children's overall health and well-being, so research and guidelines like these help parents make informed decisions for their families.