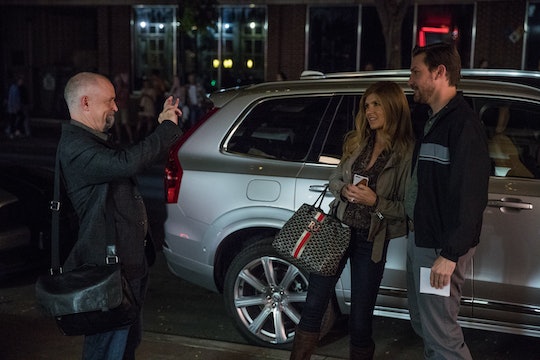 Someone May Be After Rayna On 'Nashville'

Nashville has quickly settled into its home on CMT and a couple of episodes in, we already have a potential threat against Queen of Country, Rayna James. Since she's happily married to Deacon and her family unit is intact again, we knew her conflict-free days wouldn't last. There was a brief flicker of hope that the worst thing to happen to Rayna this season would be Highway 65's middling finances, but alas, there seems to be a more sinister plot ahead: like who's stalking Rayna on Nashville.

Our first hint that something weird was going on came in the second hour of the season premiere, when Rayna received flowers with a note that read "For the only woman I ever loved." Because she and Deacon had just gotten into a fight, she assumed that they came from her remorseful husband. When she thanked him, he tried to explain that he had no idea what she's talking about, but ultimately just wound up talking to the back of her beautiful head of hair. The next time we saw Rayna was at the end of the episode, as she was walking into her office, but the framing of the scene felt odd. That's because we were actually watching her from the inside of a car with a cracked windshield (the sound system of which is eerily playing her single "Already Gone"), setting up the premise that she's being watched.

Something creepy is definitely going on, but who is behind it? There are two suspicious figures outlined early on this season. The first is billionaire Silicon Valley tech bro slash Rayna's biggest fan, Zach Welles. She flew out to California to perform for him, per his request, and learned that he's a borderline obsessive fan. Later, he showed up in Nashville and called Rayna out of the blue, asking if they could collaborate together on some half-baked project. Rayna seemed confused, but needed the money, so she agreed to the meeting. The big red flag here was that when she asked him how he got her number, he nervously deflected the question. Zach's impulsive tendencies and his stores of cash and power make him a perfect potential stalker.

The other possible suspect is Randall St. Claire, Highway 65's new social media and digital marketing manager. There's something just a little too intense and enthusiastic about him when he met his boss Rayna for the first time. He also kind of invasively grasped her hand and held on for way too long when she reached out to introduce herself. She registered him as a little off, but seemed to brush it off as just a sweet, earnest fan excited to meet her for the first time. The fact that the windshield of the car is cracked makes me think Randall is a more likely suspect, just because what are the odds that a filthy rich Silicon Valley tycoon is driving around with a broken windshield? Either way, it feels like Rayna is already hurtling towards spending untold hours tied up in a dank basement. And we still have 20 episodes to go this season.