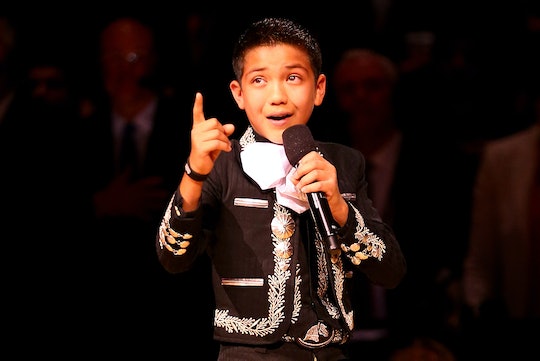 Who's The Cute Kid Who Sang The National Anthem At The Democratic Debate? He's Pretty Much a Hero

If you watched Wednesday night's Democratic Debate, you might have noticed the handsome teenage kid singing the national anthem. He's Sebastian de la Cruz, or if you prefer his stage name, El Charro de Oro, and this isn't his first time in the spotlight. So who is the cute kid who sang the National Anthem at the debate? He's much more than just a pretty face with a great set of pipes — he's the face of everyday Americans who face racism against Hispanics, even while doing something as patriotic as singing the "Star Spangled Banner," and it's shameful.

You might recognize De La Cruz. He first caught national attention on America's Got Talent for his incredible voice and magnetic stage presence. He was such a hit that in 2013 that the San Antonio, Texas, native was invited to sing the "Star Spangled Banner" at Game 3 of the NBA finals in front of his beloved hometown team, the San Antonio Spurs. But instead of the boy being cheered for his beautiful voice or stage presence, De La Cruz was disgustingly called out because he looked a little too Mexican, standing there in his Charro suit, for some NBA viewers, and was subsequently harassed by racists on social media. He was told to "go home" as if he didn't belong in the country. It was ugly and shocking.

So, on Wednesday night, Spanish language network Univision, which hosted the debate along with the Washington Post in Miami, invited El Charro de Oro to sing the national anthem once again. It made sense that an American boy be given an opportunity to be proud of his Mexican heritage in front of that particular audience — especially while Latinos across the country are being courted for their votes at the same time Donald Trump calls for walls and mass deportation while also labeling Mexicans as criminals.

But once again, De La Cruz became the focus of racism and anti-Mexican sentiment on social media.

Are these people even listening to the words of the song, "...land of the free ... home of the brave" and all that? Pretty depressing. A boy dressed like a Mariachi is exactly what makes America great, no matter what anyone else says. This is a country where everyone looks and thinks and acts differently, and that's the whole point.

But just when I had lost all hope, it was De La Cruz himself in an Eva Longoria short film for ESPN about his story called "Go Sebastien Go" that convinced me that maybe we're not all doomed.

"The world isn't perfect, but the world is good," he said. "Even though bad things happen, the world will always be good."

Now if you'll excuse me, I have something in my eye.