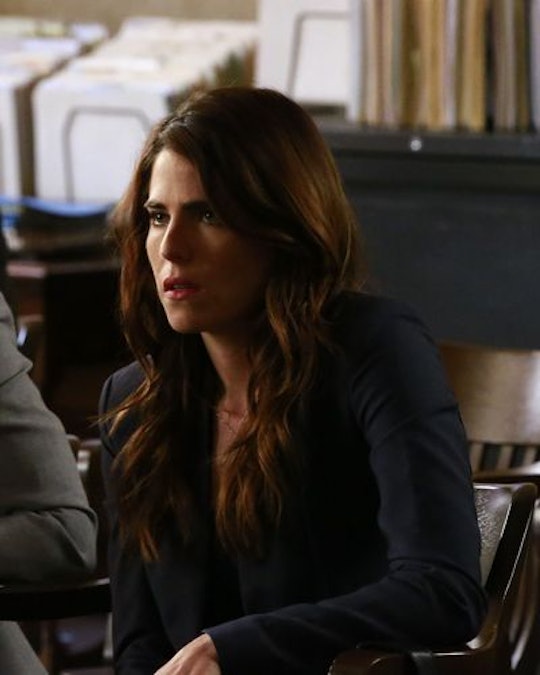 Who's The Father Of Laurel's Baby On 'How To Get Away With Murder'? It Could Be Wes

This season of How to Get Away with Murder is already filled to the brim with twists and each week it only gets crazier. Last Thursday night's episode revealed that Laurel was the other person in the house when it burned down and more importantly — she's pregnant! Of course we would all jump to the conclusion that Frank is the father of Laurel's baby on How To Get Away With Murder, but what if it's someone else? What if it's Wes?

Laurel and Wes haven't hooked up yet, but they did kiss last season and there's definitely something going on between the two of them. Wes claimed the reason he was giving Laurel space at the start of the season was because she reminded him of Frank, but is it possible he was just avoiding the feelings he has for her? Wes is currently dating Meggy, the medical school student that seems too good to be true, but it's totally possible that Wes is just dating her to move on from his confusing feelings for Laurel. Even Meggy could sense it and called Wes out on it, though, he denied it all. Despite what Wes claims, there definitely seems to be something there between him and Laurel and it wouldn't be at all surprising if they act on it and soon.

Even at Wes' surprise birthday party, Laurel left when Meggy and Wes began dancing together. Could it be that Laurel's actually jealous of Meggy? It seems very likely. There's only four weeks left until we find out who died in the fire and what exactly happened, but that's plenty of time for Laurel and Wes to hook-up at least once. Plus, unless Laurel has been hiding her pregnancy very well this whole time, whoever's the father of her baby (whether it be Wes or Frank), she would have to hook-up with them within this time frame to be pregnant. The odds of Laurel hooking-up with either Frank or Wes seem pretty equal right about now. Even though Laurel knows where Frank is, it's clear Bonnie's the one who will be dealing with Frank right now (you know, considering he just killed her father). So Laurel will have to lie low if she doesn't want Annalise to find out she's been keeping Frank's whereabouts from her this whole time.

Obviously, Frank would be the more likely choice for the father of Laurel's baby, but for that reason alone it's more likely that it's someone else and that person is probably Wes. Either way, we thankfully don't have to wait much longer before we find out the truth.