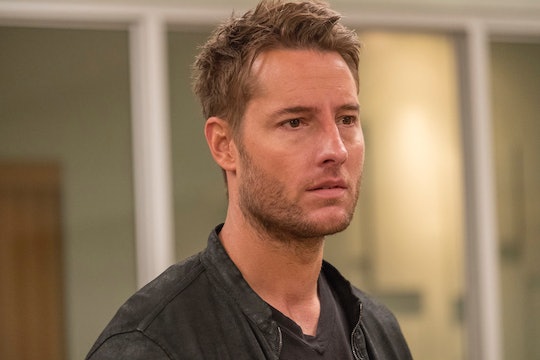 This Is Us left fans with plenty of burning questions at the end of Season 3, but nothing topped the cliffhanger moment in which Kevin’s (Justin Hartley) future reveals he has a son. Knowing he is a dad is shocking enough, but viewers are still trying to figure out who this happened with and how. I have a feeling it's going to be the biggest mystery of Season 4, leaving fans wondering: who is the mother of Kevin’s baby on This Is Us?

In the Season 3 finale, Kevin ended his relationship with Zoe (Melanie Liburd), so it was wild to see him with a son in the future. In the scene, a young boy walks across the room when Randall (Sterling K. Brown) asks him where his dad is. The boy calls him “Uncle Randall" and tells him his dad went out for takeout. “Classic Kevin,” says Randall, confirming the boy is indeed Kevin’s son.

There is no sign of the boy’s mom, which is why fans are questioning who it could possibly be. Kevin broke up with Zoe, who's been pretty vocal about not wanting to have kids. They may have gotten back together at some point, but it doesn’t seem very likely they had a child together.

However, it is plausible that Kevin reconnected with his childhood sweetheart and ex-wife Sophie (Alexandra Breckenridge) and started a family with her. In an interview with Glamour, series creator Dan Fogelman teased that Kevin and Sophie have unfinished business, and fans might see more of them in Season 4. "I think there’s more to explore there between the two of them," Fogelman said. "You never know. It depends on what happens."

When talking to Entertainment Weekly, Justin Hartley talked about the new season and Kevin’s son, and although he didn’t divulge any details on who the mom is, he did promise that fans would enjoy the reveal when it comes. “It’s pretty awesome,” he teased. “It comes together in a way where it’s very satisfying for the audience. I also think it makes a lot of sense, and it’s one of those standard This Is Us writer moments where when you see it, you go, “Why didn’t I see that coming?” But you can’t see it until it’s in front of your face — It’s in keeping with the story and Kevin and who he’s become and who he used to be, for sure.”

Hartley also told EW that viewers will get more details with each episode, and that Kevin’s future storyline could have a number of different revelations:

“I mean, did he find this kid? Did he adopt this kid? Did he get married? Did he have this kid out of wedlock? Does he have more than one child? Is this is the oldest? Is this his youngest? Why wasn’t he there? I know it was said he went to get food… It just seems like it’s wide open for an amazing story to be told.”

It’s not a stretch to think Sophie is Kevin’s baby mama. After all that they’ve been through together, I could see a baby becoming part of their lifelong love story. However, This Is Us never spares on the shockers, so there could be a number of new arcs and love interests presented for Kevin as Season 4 continues. Fans will just have to watch through the season to see how things unfold.