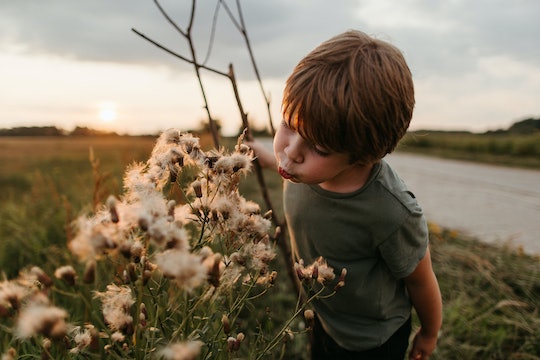 With Essential Oils, “Natural” Is Not A Health Guarantee

"Oil of oregano is one of my all-time favorite smells and it also packs a punch when it comes to its health benefits." This is a distributor for doTERRA essential oils in an email to her followers. Like much of the marketing for essential oils, the message is upbeat, personal, and loose about its use of the word "health." Essential oils seem to be everywhere, and are popular among parents looking for non-toxic ways to clean and freshen their homes. But the trend to confer "health benefits" on these products has a worrisome fringe.

“I think this is so tricky because some of these alternatives seem to be OK for right now, but some of them we just don’t have enough information,” says Dr. Jean Moorjani, a pediatrician at the Arnold Palmer Hospital for Children, who spoke to Romper by phone. “We need parents to understand that, no, just because it's natural doesn’t mean that it is safe.”

Earlier this year, herbalist Timothy Morrow was sentenced to four months in jail for his role in the death of 13-year-old boy Edgar Lopez, as The Washington Post reported. The boy had Type 1 diabetes, but his mother was allegedly told by the herbalist that insulin was "poison" to his body. In its place, she alleges that she was instructed to rely on lavender oil, applied topically on his spine, along with other herbal remedies. According to her testimony, her practitioner promised her these methods wouldn’t just help them manage his symptoms, but that they would cure him for good.

I don't think families should be using them on their own without proper guidance.

He wasn’t cured. Instead, his family watched as his condition deteriorated. In August of 2014, he died. Outside of issuing advisories on toxic essential oils, the American Academy of Pediatrics (AAP) doesn't have an official stance on the use of essential oils for children.

"If they don't meet with a certified aromatherapist, they likely are not going to be using essential oils safely. There are tons of precautions for essential oils, especially for kids," she explains. "I don't think families should be using them on their own without proper guidance."

Thirteen-year-old Lopez was not the first child victim of complementary and alternative medicine (CAM). In 2015, a seven-month-old died of a bacterial infection in Texas after his parents chose natural remedies, including essential oils, to treat an ear infection, as the San Antonio Express-News reported. In 2013, USA Today reported that a 7-year-old died of organ failure in Calgary, Alberta, after his mother treated his strep infection, which eventually evolved into meningitis and pneumonia, with dandelion tea and oregano essential oil.

Stories like these are devastating, detailing the life of a child cut short, helplessly reliant on parents who have made fatal decisions about their health. Essential oils are usually not the cause (though some, like peppermint oil and winter oil, can be toxic for children, as the National Institutes of Health and New York Times, respectively, state, citing a 2007 American Family Physician study) but they are a common factor — an alternative remedy currently marketed to parents by influencers and multi-level marketing (MLM) companies.

Any medical claims on a supplement label require the Food and Drug Administration to treat it as a drug. (The FDA issued a warning letter to Young Living in 2014 over online marketing of the essential oils as preventatives or treatments for medical conditions like breast cancer and ebola, and a similar letter to doTERRA at the same time.) DoTERRA did not respond to Romper's request for comment, but instructs its marketers not to use words like "cure" or to invoke diseases in online materials, in line with FDA directives. Still, claims made by sellers are harder to regulate.

Sometimes people do get into the business of selling ... and they themselves don’t have enough education.

Karen Serrano, a Young Living essential oils distributor who uses her Instagram platform to talk to her 31,300 followers about “staying above the wellness line” and supporting “health,” isn’t sure that everything being shared online about essential oils is safe. She has concerns with those who don’t take full responsibility for educating themselves before they begin selling products to others.

“I think that is the biggest reason essential oil MLMs have such a bad rap,” she tells Romper over the phone. “Sometimes people do get into the business of selling ... and they themselves don’t have enough education."

Sellers do not have to be medical professionals, but they are incentivized to make the sale. A member of the Young Living essential oils marketing program who achieves "crown diamond" ranking makes an average of over $700,000 a year, and takes around seven years to ascend to that status, according to Young Living’s Income Disclosure December 2017 report. A "royal crown diamond" member, the highest-ranking, makes over seven figures (while a majority of sellers make as little as $876 a year per a 2013 disclosure).

"Young Living has an active compliance team who monitors, educates, and aligns members concerning health claims," wrote a representative of Young Living in an email to Romper. "We also provide training to leaders via calls and provide a resource on our YL Facebook conduct page."

Spend a few minutes scrolling through the bios of crown diamond and royal crown diamond members on the Young Living website, and you’ll see multiple mentions of their life-changing experience with oils. This language is enticing, and in some instances skips over the importance of proper education on uses of oils.

But what is a proper education? Serrano sees the oils as something to be used daily and "intentionally" to improve wellbeing, but not as a cure or treatment for ailments. If her child has a cold, she might increase her use of preventative oils the manufacturers have claimed boost the immune system. If that cold transforms into something more, like a fever or infection, she’s not about to try to treat that with oils.

Christie Schmerck, 31, a mom of two living near Kansas City mostly diffuses oils in her bedroom in hopes of sleeping better at night. She says she also uses a blend to manage teething pain for her baby sometimes, something that she said she felt comfortable doing without consulting her child's pediatrician. There is also a popular blend for immune support that she diffuses if her kids are sick.

She decides what to use and how to use it based on materials she was given in a class. It's a chart that outlines how much an oil should be diluted based on a child’s age and weight. These charts are pretty easily found online, a quick search on Pinterest or Google will confirm that there is a lot of information out there on "safely" using essential oils on kids — which may or may not be good information, considering what Esparham has to say about the amount of training required to truly understand oils.

"It is a little bit on the dangerous side if companies are telling parents how to use essential oils for their kids," she says. "They're really powerful and they come with many safety precautions for each essential oil."

These precautions, she says, are something only a trained aromatherapist would truly understand given how greatly the side effects vary from oil to oil.

They’re not under the same kind of scrutiny that traditional medications are with the FDA.

Moorjani wants parents to be open with their child’s doctors about their plans for using alternative therapies. While some parents may feel that conventional and alternative medicine are pitted against each other, she says that most pediatricians will respect honest communication and be more than willing to help parents decide what is best for their child. First, the doctor has to be completely aware of the parent’s concerns are so they can help them find the right solution, whatever that may be.

“We want the same things families want,” she says. “We want their children to feel better.”

Serrano also asks that parents be completely upfront about what they may try with their child. Anytime parents are considering introducing something to their child, she believes they should discuss it with their child’s healthcare provider.

Asking around, some of the parents I know who use oils didn’t really think they needed to have a talk with their kids’ doctors because they didn’t see the harm in using in them. Others did chat with their child’s pediatrician first and found they were open to giving it a try, but didn't know much about them.

The attitude that they can’t do any harm, in part, is the danger of the popularity of essential oils. This idea that because they are plant-based and natural, they are safe, is easy to digest — but it may not be that simple. As Serrano points out when we talk over the phone, they’re obviously doing something in the body or they wouldn’t be being used. They're not neutral.

“They’re not under the same kind of scrutiny that traditional medications are with the FDA,” says Moorjani. “Meaning, they don’t go through the same research trials or studies.”

This means we don’t always know how an alternative treatment will affect a child. Moorjani explains this is more complicated than children being “little adults.” They’re not; they metabolize things differently than adults do and this could make some substances dangerous to them. There is also the possibility of drug interactions and, in some cases, a child could be harmed not because the oils being are dangerous but because the omission of conventional treatment prevents the child from getting the care they need.

When it comes down to it, the best way to go about keeping a child healthy or addressing health concerns is with the help of a doctor. Together, parents and doctors can find safe and effective ways to deal with illness or injury, and take a deep breath of nothing but relief.

Dr. Jean Moorjani, M.D., a pediatrician at the Arnold Palmer Hospital for Children