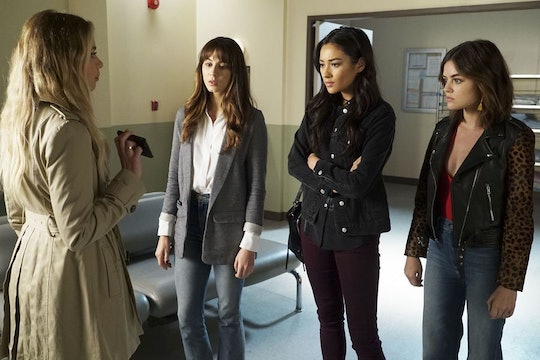 It was Hanna's turn to play A.D.'s game in Pretty Little Liars Season 7 Episode 13, but she messed up big time. Instead of carrying through with a task that would have ruined her professionally, she ran to Caleb's bedside when A.D. incapacitated him through the game. Making sure Caleb was OK was understandably a priority, but A.D. was still going to punish Hanna for not playing her turn out to the end. It wasn't clear at first just what that punishment would be — not until "Hold Your Piece" ended with Detective Marco unwrapping a rotting (and potentially incriminating) dismembered finger. But whose finger was sent to the police on Pretty Little Liars?

The most obvious answer is Archer Dunhill, a.k.a. Elliott Rollins, Alison's scheming ex-husband. Hanna was technically the one to run him down and kill him even though all the girls were present, and she was also caught on video digging up his body. A.D. had been using Archer's death as blackmail for weeks, so it would make perfect sense for the finger to be his. Hanna messed up and, as revenge, A.D. decided to dole out a little hint to the police about what happened to Archer. It wouldn't technically link Hanna to the crime (at least not yet) but it was guaranteed to up the stakes.

But there might be another possibility, too. The promo for next week's episode, "Power Play," showed a corpse appearing outside one of the Liars' homes; specifically, it was the corpse of Jessica DiLaurentis, Alison's mother. Mrs. D. was murdered back in Season 4's "A is for Answers" but her killer was never revealed. It looks like fans might find out the truth in Season 7, and it's possible that mystery could be revived by A.D. sending Mrs. D.'s finger to the police.

The fact that Hanna messed up during the game would seem to indicate that she was the one being penalized by A.D.'s police tip-off, but there wasn't actual confirmation that A.D.'s actions were intended to get back at Hanna. It was just implied. It's totally possible that Hanna's incomplete task and the delivery of the finger are unconnected events. A.D. always seems to be playing multiple games at once, and this might not be any different.

The finger belonging to Archer would make the most sense, but the audience isn't privy to all of A.D.'s plans. They could be setting something in motion that won't pay off until "Power Play" unfolds. There are all kinds of secrets buried in Rosewood, and this new development could be connected to any number of them.