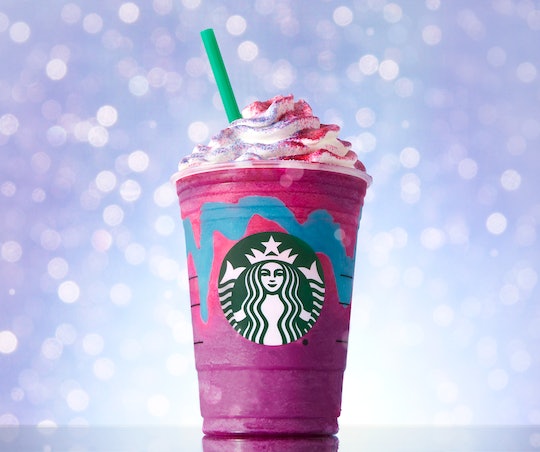 Who Invented The Unicorn Frappuccino?

The internet has been obsessed with so-called "secret menu" items for fast food restaurants, so much so that some chains are actually starting to heed the ideas of the masses. Starbucks has gone so far as to develop new drink recipes that leave people clamoring to try them — either before the store runs out of ingredients, or the limited run of the new drink is over. The latest drink just bid farewell to customers, but whose idea was the Unicorn Frappuccino anyway?

Of all Starbucks' offerings, "fraps" are among the most popular in any iteration, but certainly the more unique and colorful varieties. The coffee drink is served cold, with plenty of ice and milk blended together to give it a sweet, creamy taste. Flavored syrups and a dollop of whipped cream give the fraps their signature appearance and allow customers to customize their drink to taste. While Starbucks has several established frap flavors on their menu, customers are basically only limited by their creativity and their barista's ability (or willingness) to deliver. Many flavors mimic their coffee and tea counterparts: vanilla, cocoa, green tea, caramel, and cinnamon dolce among many others. The internet's Starbucks secret menu boasts recipes for every kind of frap imaginable, using stuff you probably have at home like breakfast cereal or your favorite candy.

Starbucks officially took note of the internet's collective interest in unique drinks and announced last week that for a few days only, stores around the country would unveil the Unicorn Frappuccino. The color and flavor-changing drink proved to be exceedingly popular — if not also the bane of many a Starbucks barista's existence — but who came up with the concept?

In an email to Romper, Starbucks Media Relations Team explained that like many great marketing ploys of the last few years, the whimsical drink was inspired by social media:

Starbucks kicked off this year’s Frappuccino season with our first new flavor of the year – the Unicorn Frappuccino! The look of the beverage was an important part of its creation, and our inspiration came from the fun, spirited and colorful unicorn-themed food and drinks that have been trending on social media.

Brightly-colored, glittery, unicorn-inspired culinary creations have been popular for the last year or so, taking off particularly well on image-ready social media platforms like Instagram and Pinterest. The Unicorn Frappuccino fell right in step with the trend: in just a week, the drink was featured in more than 180,000 Instagram posts, according to UBS data.

While the Unicorn Frappuccino is gone for now, customers at one of the world's most magical places are in for a whole new treat: at Disneyland, the Pink Pegasus Frappuccino was created when baristas started running out of the fixings for Unicorn fraps before the promotion was over and needed to think on their feet. No word on whether Starbucks will add it to a lineup of magical drinks, but it isn't out of the realm of possibility — admittedly, they are scouring social media for ideas.