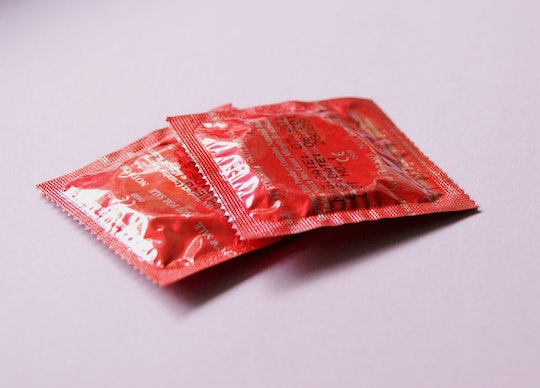 Why A Male Birth Control Option Is Great For Moms

I cannot believe I am writing this — I cannot believe it took until 2016 to write this — but men may soon have another birth control option. A semi-permanent, non-hormonal, and non-latex based option. Enter Vasalgel: a polymer injection, being developed by the Parsemus Foundation, which will not only act as long-lasting male birth control but it will also be a reversible male birth control. And this is huge for men, for women, and for me — as a mother and wife. But why is male birth control is great for moms and all women? It's a game changer for so many reasons.

I started taking birth control when I was 21 years old. (Before that, I was your typical “slap a condom on that” sorta gal.) I couldn’t tell you the name of the pill I was given nor do I recall who prescribed it — my general practitioner or my OB-GYN — I just remember why I got it: my husband and I were getting married the following year and I wanted to enjoy our wedding night — fully enjoy our wedding night. So I started taking the pill months in advance. And I continued to take the pill — well, multiple variations of the pill — for seven years. (Seven freakin' years!)

I only came off the pill when my husband and I were ready to start a family. When we decided to start “trying.”

After my daughter’s birth, I didn’t give so much as a second thought to birth control. I mean, I didn’t have my period and I didn’t have much of a libido, so I just wrote it off. I ignored it. I was enjoying life side-effect free. But, eventually, my “friend” returned. After 16 glorious months, my period returned, and, because I wasn’t ready for a second child, I went right back on the pill without so much a moment's consideration. It wasn’t until my third month of bleeding (not heavy bleeding, but constant and consistent bleeding) that I decided enough was enough. It was time to stop taking birth control for good.

Over the years I switched things up in an effort to get all the benefits of the pill with the least amount of side-effects. But every pill had side-effects. Some pills caused constipation. Others made me bloated. Some pills squashed my libido, and others made me emotionally unpredictable. Most birth control pills dictated my anti-depressants. (That's right: antidepressants and birth control pills don't play well together, and I usually had to sacrifice the effectiveness of one for the other. And I played this "game" for years. So. Many. Years.)

I switched from name brands to generics. I tried monthly packs and packs that promised to give me a period every three months instead of every 30 days. And I took pills that have since been discontinued — they have since been recalled and some become the focus of various legal battles and class-action lawsuits.

Thus, the reason Vasalgel is so amazing is because it is non-hormonal, it is long-lasting, and it is made for men. It has been designed specifically for men, and as such, it gives women an option. Women, and mothers, like me now have a choice, and that is important. Why? Because I will no longer have to expose myself — and my body — to negative, mood-altering chemicals and potential drug interactions. I will no longer have to deal with uncomfortable and sometimes scary side-effects of "the pill." And, instead, my husband can carry an equal burden in preventing birth — simply, presumably safely, and without any hormonal changes to him or me.

So how does Vasalgel work? The gel is similar to a vasectomy in that it keeps sperm from leaving the vas deferent, according to Cosmopolitan, but unlike a vasectomy, it is non-surgical and reversible. (Sweet!)

However, there are a few downsides. First, Vasalgel has not yet been tested on humans. (To date, Vasalgel has only conducted trials on male rabbits.) But good news: the first human male trial is scheduled for later this year. Unfortunately, that trial brings us to the second downside. Vasalgel is an injection — an injection given directly into a man’s penis — and a huge part of the trial and the drug's success will be dependent on how well physicians are or are not trained. But Elaine Lissner, executive director of the Parsemus Foundation, is hopeful, according to Cosmopolitan.

Physicians who do no-scalpel vasectomies right now will be the perfect people to do Vasalgel [because the procedures are so similar].

And while I lost many men when I said "injection" and "penis" in the same sentence, here's the thing: birth control isn’t just a woman’s burden to bear — or at least it shouldn’t be a woman’s burden to bear. In many cases, female birth control is risky and dangerous, and it can even be deadly. (Just last year a 21-year-old girl died in Tamworth, Staffordshire, from a pulmonary embolism reportedly caused by her birth control, according to Live Action News.) And, as a mother, not only does male birth control keep my mind safer — I don't have to worry about moods, my health, or a baby I am not ready to care for — it keeps my body safer, and it keeps my daughter safer. Because a safer, healthier me makes for a happier, better mom.

If all goes well, Vasalgel will be available in 2018. Fingers crossed that it comes through, because it would be a step forward for all women — especially mothers.