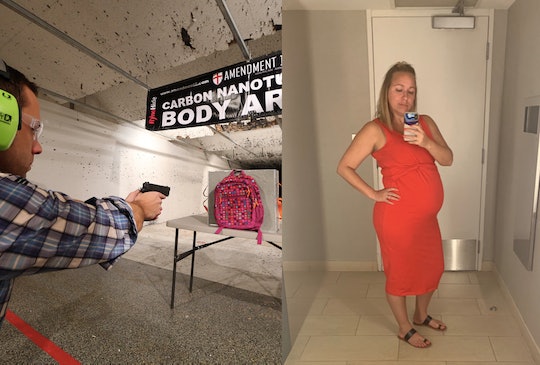 I've Always Wanted to Be A Mom, But Why Am I Bringing A Child Into This World?

I am 33 weeks into my first pregnancy. My very wanted, very planned pregnancy. And every day, at least once a day, I ask myself (or my husband) why I am bringing a child into this world.

On Friday, my husband texted me a photo from Twitter of what is now a commonplace back-to-school item: a bullet resistant backpack, on sale for $119.99. A day later, families in El Paso doing their back-to-school shopping were murdered with a weapon of war by a white nationalist terrorist.

I cannot get the images from this weekend, and of that backpack, out of my head. It feels like our politics and the policies they create have made our country deeply unsafe for our children. When I should be practicing labor and delivery breathing techniques, or trying to decide which of a million available bottle and nipple combinations to buy, I am, instead, preoccupied by those same policies and how they are, at this very moment, shaping the future my child will one day be handed.

I have always known I want to be a mother. Yet our country’s policies force me to question daily whether I am making the right decision. It’s not just the gun violence, and our leaders’ unwillingness to take a single step to curb it because a small, loud minority of people care more for their misinterpretation of the 2nd Amendment than they do for human lives. It’s also our inability to come to terms with the global climate crisis that will kill many more and create resource scarcity and conflict. It’s growing income inequality. It’s the racist in the White House and the pervasive, systemic white supremacy that put him there. It’s my own parents’ political ideologies — how they and millions like them refuse to vote in the interest of their own grandchildren because they would rather dwell in the past than take care of the future.

For me, choosing to have a child is an intentional act of hope that we can solve the problems facing our country.

It's also the fear of the unknown; not the unpredictability of parenthood (I signed up for that), but a potential future in which women like me will no longer be allowed to make their own reproductive decisions at all.

Because that right is rapidly being taken away.

Since 2011, states have passed 479 restrictions on abortion, including this year’s laws in Alabama, Georgia, Mississippi, Ohio and Missouri that ban abortion before most people even know they’re pregnant. The Trump-Pence administration has stacked the courts, including the Supreme Court, with anti-reproductive health judges in the hopes of overturning Roe v. Wade. And they’ve taken steps to make it harder to get birth control, by rolling back protections in the Affordable Care Act and working to dismantle Title X, the nation’s only program devoted to family planning for people with low incomes. Maternal mortality is rising in the U.S., and Black women are dying at a rate more than three times higher than white women.

We have urgent problems that need solving. Problems that are taking people’s lives, taking mothers and fathers from their children and ripping children from their parents’ arms. Women’s ability to make their own decisions about their bodies and their futures is not one of them. Of course we need the right to safe and legal abortion (77 percent of Americans agree). It’s an essential right in this world we have built, where many mothers are forced to raise their children without access to maternity leave, affordable child care, decent health care, schools that adequately prepare their children, or jobs that pay the bills and give them time off to care for a sick child. A world where there is no protection from the threat of gun violence, and where a $119.99 backpack is out of reach for most.

I worry that backpack is the best we can do to protect her freedom and her future.

Our leaders have created a world that is not kind to children or their mothers. For Black women, Latinas, and people with low incomes, it is a hostile world, made more hostile by a president who stokes racist violence and whose policies make it impossible to live healthy lives.

For me, choosing to have a child is an intentional act of hope that we can solve the problems facing our country. But I am white. I am a U.S. citizen. I am solidly middle class in an affluent suburb of Washington, D.C. I have excellent health insurance. I have a job that I love and the means to pay the annual average $33,000 it costs in my community to send my child to daycare. There are millions of people who cannot claim all of these privileges. There are millions who cannot claim any of them. Yet they too must raise their children in this country. Why have we made it so difficult for them?

I am having a girl. She will grow up with parents who will support her decisions and help her fulfill her dreams. We have the means to buy her a $119.99 bullet resistant backpack. To pay for all the health care she will need — including abortion if she ever needs one, whether it is legal or not.

Yet still I fear for her. I worry that backpack is the best we can do to protect her freedom and her future. For her, I am begging our leaders and every voter who elects them: Do better.