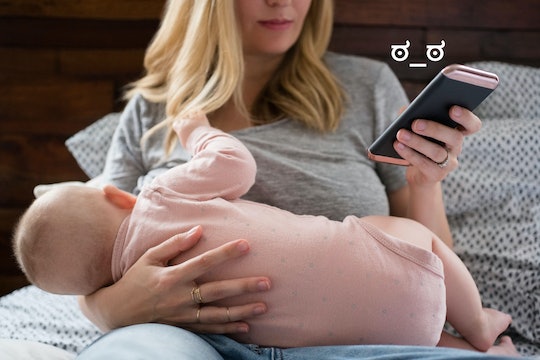 I’m rounding the corner on my second trimester for baby numero 2, which means I’m in that curious phase of making ~judicious~ plans for 30 weeks’ time about how I’ll do better this go around. Recently, as I lay awake at 3 a.m. after the third pee trip of the night, a conversation with Rebecca, a mom-friend, floated to the top of my consciousness. In complaining about the Facebook wormhole she fell down in the wee hours, she had reminded me of the correlation between round-the-clock breastfeeding and increased smartphone consumption. She is tormented by social media, but addicted. Her particular neurosis is tied to the anti-vaxxing memes that plague her news feed and hit her at the psychological and emotional jugular. Rebecca, like so many moms during the “fourth trimester,” is sleep-deprived, emotionally vulnerable, and, in 2019, tethered to her phone to help the time pass while the rest of the world sleeps. She is the precise target market that memes were designed for.

As a linguistics scholar, I study patterns of learning, so I know a bit about how the brain works when it's exposed to multimodal media. What we think of today as “memes” — expanding brain, distracted boyfriend, literally no one — are digital mash-ups that follow certain conventions. They provide a central commentary about our lives, exist to invoke an emotional response (i.e., humor, fear, nostalgia, compassion) and use visual and textual modes that work in tandem to lodge in your brain. This last feature has been shown to profoundly impact your cognition.

Our lizard-brains are hard-wired to consume these juicy digital billboards as we zoom through our feeds.

You’re familiar with Charles Darwin’s concept of “survival of the fittest,” by which the most successful genes are passed on, and the original concept of memes, introduced by Richard Dawkins, was a piece of information — a behavior or idea — capable of replicating itself. That is, something bigger than one person, and potentially something that trumps an individual’s self-interest — think of the urge to self-sacrifice, for example. Today’s “memes” distill ideas, both good and bad, into perfect visual vehicles, which then whoosh around the internet replicating and mutating. Our lizard-brains are hard-wired to consume these juicy digital billboards as we zoom through our feeds, hardly stopping to consider whether a) they’re true, b) they hold up to scientific (or even common-sense) scrutiny, or c) the person who re-posted them is a reliable source.

“The reason why it is now possible for Darryl from Accounting who hates ‘social justice warriors’ to have the same communicative power as a television network is down to the DNA of the medium: speed and lack of gatekeepers,” wrote Douglass Haddow in a 2016 piece for The Guardian on meme warfare. “Memes thrive on a lack of information – the faster you can grasp the point, the higher the chance it will spread.”

Which brings me back to the highly vulnerable nature of a postpartum mom up with her newborn and tethered to a screen. Rebecca, and my future self, aren’t a terribly discerning audience due to the depleted resources of the given circumstances. It is precisely in those moments when a meme is most potent, and hence, most perilous. How could a picture of a mangled child coupled with the text “JUST WAIT UNTIL YOUR BABY DIES FROM A VACCINATION IN 6 MONTHS” not thrum your heartstrings and, by association, your neurons, firing on high-alert because you’ve just been blasted with the perceived threat of infant mortality?

She’s not an idiot (as so many of us would prefer to believe), she’s simply consuming toxic content.

Anti-vaxx memes like this and this and this, while varying in tone, create a micro-traumatic experience that, if consumed constantly, can permanently shift a human’s perception of truth and reality to the point of denying that pesky scientific method just because it feels so true. God help the mom that “knows someone” whose kid died and had, because of medical policy, gotten their shots. She’s not an idiot (as so many of us would prefer to believe), she’s simply consuming toxic content that, over time, renders her judgment jeopardized to the point of believing that anything is possible and is, in fact, probable.

My advice to Rebecca, and to my future self? DELETE YOUR FACEBOOK APP FROM YOUR PHONE. Repeat that phrase 10 times, and then do it. There’s no shortage of ways to consume content while you’re a captive audience. Listen to a podcast, read a graphic novel, create an Instagram story of all those cute pictures of your new baby [for whatever reason, IG doesn’t succumb to the meme-ification of social media like its blue-branded cousin]. On my first go through the newborn phase, I downloaded a meditating app and found the experience to be a delightful respite from the relentless slog of caring for an infant.

The bottom line here is to treat memes like the high-glucose digital garbage that they are and make decisive moves to reduce your consumption of them in your cyber diet. Better yet, post this article in your feed to help other moms-in-need wake up to the scary truth of their toxicity.

More Like This
How To Breastfeed A Baby With A Cleft Lip Or Cleft Palate
Here's Why Wearing Long Sleeves In The Summer Can Be Good For Your Baby
Can The Baby Have That?
It's A Beautiful Day In Jenny Slate’s Neighborhood