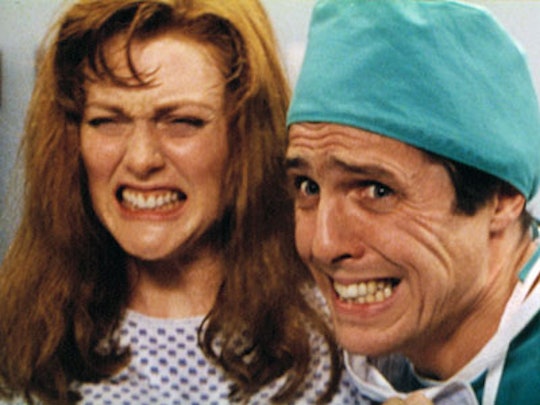 Why Are All “Pregnancy Movies” About Men?

There are not many movies about pregnancy from the female perspective, which is funny because women are the ones that have babies. Pregnancy movies are usually about a guy completing a task and then being stressed out because they are watching someone have a baby. Knocked Up is about a guy looking for a job, who then watches Katherine Heigl have a baby. She’s Having A Baby is about a dude struggling to write a novel, who then watches Elizabeth McGovern have a baby. Rosemary’s Baby is really the lone exception but it is unfortunately about a devil cult.

Some might think having a baby from a female perspective would be dramatically interesting — it is a time-limited enterprise in which death can occur, like war or stealing money from a casino — but I guess it's not. Anyway, I am pregnant now, and as a pregnant, I have tried to watch a lot of movies about pregnancy because how else do you know how to be pregnant?

And in my research, I finally discovered the MOST classic pregnancy movie, Nine Months, starring Hugh Grant and Julianne Moore. I really think everyone should watch it. It is about a man who pierces his ear and also watches someone have a baby.

Hugh has convinced himself that Julianne has “trapped him” with a baby and keeps having dreams that she is a praying mantis who is going to bite off his head.

Here is a summary. Hugh Grant is a child psychologist with a red Porsche who has been dating Julianne Moore for five years. He’s blissfully happy, but she’s sort of unsatisfied, which I get because at the time Hugh Grant had a very unflattering shelf haircut. At a picnic on a cold San Francisco beach to celebrate their anniversary (hell), Julianne Moore keeps looking at a tiny red-headed boy building a sand castle. She sighs. She wants a baby with red hair! But Hugh does not and he especially does not when some horrible children (whose parents are Tom Arnold and Joan Cusack) spit on a tin of caviar that he brought to the beach (why did you bring a tin of caviar to the beach tho).

Only five minutes later, Julianne and Hugh are driving through some kind of vineyard in the red Porsche and Julianne confesses that she is pregnant! How?? She was on the pill!! The end result is that Hugh drives his Porsche off the road he is so surprised and displeased. Later, when they arrive at his friend’s house (the friend is played by Jeff Goldblum with a pierced ear), Hugh has convinced himself that Julianne has “trapped him” with a baby and keeps having dreams that she is a praying mantis who is going to bite off his head.

Apparently, Jeff Goldblum and Joan Cusack are siblings and so the horrible kids are conveniently at Jeff Goldblum’s house hiding in beds and slapping Hugh Grant across the face. During a beautiful al-fresco lunch, Hugh Grant and Joan Cusack get into a fight about whether kids make people boring. Hugh says they do! Joan Cusack says they do not! Nothing is resolved, but the conflict escalates wildly, seemingly untethered to the mores of civilized society.

Finally, Julianne Moore has one last ultrasound appointment that Hugh Grant misses because he is playing tennis with Jeff Goldblum.

The pregnancy continues. Hugh Grant and Julianne Moore find an insane Russian doctor played by Robin Williams (so excellent and keeps crying). They run into Joan Cusack and Tom Arnold at the doctor because they are having another horrible kid. Despite the almost unhinged hostility that has characterized all of their meetings up to this point, they become friends, buying baby gear together, and talking about their deepest darkest secrets. Hugh continues having dreams about the praying mantis. He refuses to give up his red Porsche, which only has two seats. He doesn’t want to give away his cat even though the Russian doctor insists on it. Finally, Julianne Moore has one last ultrasound appointment that Hugh Grant misses because he is playing tennis with Jeff Goldblum.

She has decided enough is enough! She hates Hugh and is going to leave him and live with Tom Arnold and Joan Cusack even though she seems to find them faintly ridiculous. This is the longest speech she gives in the entire movie and it is only five lines. She will go on to win the Oscar for Best Actress in 2015 but it is 1995 and for now she is just paying the bills. Hugh is stunned. Why is this happening? All he has done is act like a dick about the pregnancy the entire time. But it is to no avail. Julianne is leaving him. The worst part is that it’s finally revealed he is having a boy! And not some worthless girl who could get pregnant and ruin a man’s life some day.

As a pregnant person I really had trouble relating! I really do not think of myself as a praying mantis trying to bite off my husband’s head.

Hugh is despondent over the break up. He goes to parties and has no fun. He gets an earring. Finally, Julianne Moore has a pregnancy complication and Hugh rushes to the hospital to propose marriage. She accepts even though he has an earring now. Eventually they have the baby, and because it is a boy they love it! Tom Arnold and Joan Cusack have a girl even though they thought they were having a boy — serves them right!

This is an interesting movie for many reasons. It is a prime example of the pregnancy comedy centered on men. It is a coming-of-age movie for 30-year-old men too busy pretending they are George Clooney to get it together (like so many men I have known). And it is also about the transformative joys of having a male child.

And unfortunately, as a pregnant person I really had trouble relating! I really do not think of myself as a praying mantis trying to bite off my husband’s head. I asked my husband if he ever had a dream that I was a praying mantis trying to eat his head and he said no, he doesn’t dream at night. And since that was the only salient detail about Julianne Moore in the movie, it was hard to gather much of the lessons I needed about pregnancy from the film!

And thus, it begs the question — why is anyone pregnant even in it? Couldn’t it just be about piercing an ear?