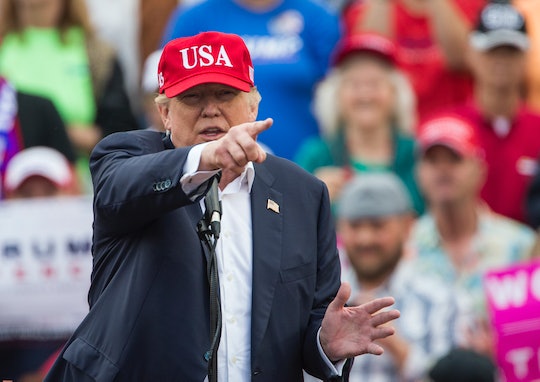 The spread of nuclear weapons, or nuclear proliferation, is bad and dangerous for the entire world. Which is why American presidents have been careful and measured about the way they talk about the country's plans to manage its existing nuclear arsenal. Until now, that is. No matter that he's not actually president yet, or that he doesn't actually appear to have a cohesive, or coherent, nuclear strategy, President-elect Donald Trump fired off a tweet on Thursday that experts think could spark a new global arms race. Why are arms races bad, though? It's simple: More nukes means more potential nuclear conflicts. Now if someone could just let Trump know how dangerous this kind of talk is, we would all be much safer.

Over the course of the campaign, Trump was unable to demonstrate a working knowledge of even the most basic aspects of America's nuclear capability. During an early debate, Trump didn't appear to know what the "nuclear triad" is, Rolling Stone reported. The triad refers to the three ways the country can deliver nuclear bombs: dropping them from airplanes, sending them from silos on land, and sending them from submarines in the water, according to CNN. He also said, as TIME reported, he doesn't think it's necessarily a bad idea for other countries, like Japan, to get nuclear weapons of their own. Then he told the New York Times, he thought the biggest problem in the world today is nuclear proliferation, according to TIME. Trump hasn't appeared to be able to settle on a position on how he intends to wield the most deadly weapons the world has ever known.

Now that he's elected, that's kind of a big deal, as American military leaders, policy wonks, and countries around the world try and read signals about how Trump's administration intends to approach America's nuclear arsenal. Trump's team hasn't responded to Romper's request for comment regarding whether his most recent comment was encouraging nuclear proliferation.

First, Trump isn't the president until Jan. 20, and the U.S. has engaged in the START Treaty with Russia, in which both countries have agreed to reduce nuclear stockpiles, according to Politico, which also reported that the U.S. and Russia collectively have more than 90 percent of the world's nukes.

Does he intend to break the treaty once he assumes office? No one knows.

The fear? That loose talk about nuclear weapons could spark a new global arms race, John Tierney the executive director of the Center for Arms Control and Non-Proliferation, told Politico. Meaning, if the U.S. is going to reverse course and start stockpiling and improving its nuclear arsenal, other countries will undoubtedly respond in kind. “It is dangerous for the President-elect to use just 140 characters and announce a major change in U.S. nuclear weapons policy, which is nuanced, complex, and affects every single person on this planet,” Tierney said in a statement, according to Politico.

But any anxiety about the potential of a renewed arms race isn't shared by Trump, who said, according to NBC reporter Katy Tur:

"Let it be an arms race." It's a statement experts say, according to the Business Insider, is dangerous. Bruce Blair, an expert on the issue from Princeton warns an arms race would inevitably lead to increased nuclear proliferation and could put the world in a dangerous position where "nuclear weapons will inevitably be used," Blair wrote, according to Politico.

Jeffrey Lewis, the director of the East Asia Nonproliferation Program at the Middlebury Institute of International Studies called Trump's statement "irresponsible," according to Business Insider, adding Trump's statement, "would sound half-clever if he was sitting on a bar stool."

But Trump isn't the town drunk spewing strong opinions just before last call. He's going to be the president and in charge of life and death matters that impact the entire world. It might be time to take the job, and his talk about an arms race, more seriously than this.