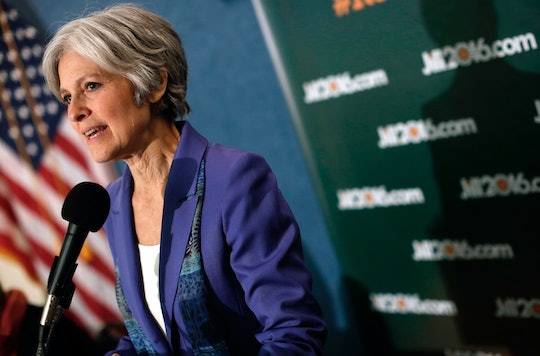 Why Are Bernie Sanders Supporters Voting For Jill Stein? She An Anti-Establishment Choice

As Vermont Sen. Bernie Sanders' run for the Democratic nomination is all but symbolic at this point because of delegate math, his supporters are increasingly rejecting the idea of shifting their support to former Secretary of State Hillary Clinton. Instead, they're taking a close look at Dr. Jill Stein, the Green Party candidate. So why are Bernie Sanders supporters supporting Jill Stein? Because she's not Clinton, who has all the baggage of decades of being labeled as "corrupt" by her foes and the media and a less-than-inspiring campaign style. Stein has also been pretty smart about seeing an opening to court Sanders' enthusiastic legions of followers who deeply believe that a political revolution is the only solution to the problems facing America.

Stein reached out to Sanders after his loss in the New York primary, which dealt his candidacy what many viewed as the final delegate death blow. She wrote an open letter asking Sanders to join her on a unity ticket, slamming Clinton and the Democratic National Committee for rigging the system against his campaign, according to her website:

The Democratic machine has launched an unjust attack on your campaign - from the NY Daily News hit job to Paul Krugman's unfounded assault, the DNC's efforts to minimize your debate exposure, and the near-unanimous endorsement of Clinton by Democratic elected officials and super-delegates. As the neoliberal Democratic machine mobilizes to quash revolution in its ranks, I urge you to consider opening a window of historic possibility outside the Democratic Party. I would love to explore with you collaborative ways to advance that effort and ensure the revolution for people, planet and peace will prevail.

And some Sanders supporters are voicing their support quickly with social media and petition efforts to convince Stein and Sanders to team up.

So, at this point, Sanders is faced with a choice about whether he wants to use his leverage with the Democratic National Committee or walk away and start a new revolution as an Independent. If Sanders stays with the Democrats, he'll be able to go into the convention this summer with ample ammo to demand the party shift the platform to address the issues he's campaigned on like economic and social justice. If he breaks with the Democrats and supports a Green Party independent bid, he could split the Democratic voters and all but hand the White House to Donald Trump, in a similar election to 2000 when Ralph Nader ran against Vice President Al Gore and then-Texas Gov. George W. Bush. Nader siphoned off enough left-leaning votes from the Democrats to help Bush win.

So keep your eye on Stein and her play to attract Sanders, his supporters, and his vast campaign war chest, which could help put the Green Party on the map and hand another tough loss to Clinton in her bid for the presidency.