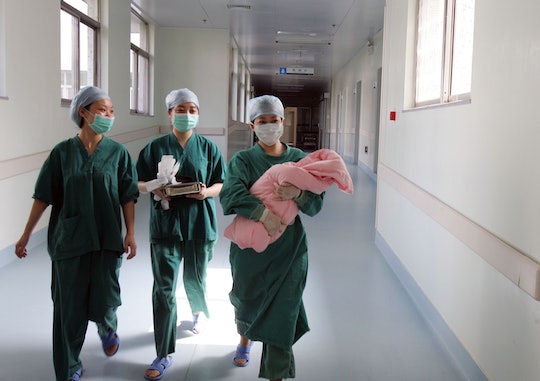 Why C-Sections Might Be On The Rise In The US

The number of C-section procedures occurring in the United States has risen dramatically over the past few years, and compared to other developed countries' numbers, the United States' rate of one C-section per three births can seem pretty steep. But when analyzing the new trend, it seems important to ask exactly why C-sections are on the rise in the country. Are more women having the procedure for medical reasons or have the number of elective C-sections increased since the surgery's early days?

More Like This
Lightning Crotch Can Actually Tell You These 7 Things About Your Pregnancy
Could Increased Anxiety Mean You'll Go Into Labor Soon? Experts Explain
Let’s Bust All The Myths About The COVID Vaccine & Fertility
Your Guide To Hiking During Pregnancy

Many C-section naysayers seem to believe it's because more and more women are choosing to have the procedure done "just because" — but the research doesn't support that argument. According to a report released by the American College of Obstetricians and Gynecologists in 2014, only 3 percent of C-sections are carried out because of mothers' requests for it. Over half (57 percent) of all C-sections took place because of "arrest of labor and abnormal or indeterminate fetal heart rate tracing," and abnormal fetal positioning made up another 17 percent of C-sections. Pre-eclampsia, multiple gestation, macrosomia, and other obstetric conditions make up the rest of the C-sections (23 percent) that take place.

In other words, it's not fear of natural birth that's raising the C-section count in the United States. But experts warn that — considering that the country's maternal and infant mortality rate hasn't gone down as C-section numbers have gone up — we may still be overdoing it. More than 30 percent of American births are C-sections, but the benefits to a population's babies and moms plateau after the C-section rate reaches 19 percent, according to Stat News. And having a C-section when it's not medically necessary can actually be riskier to both moms and babies than a vaginal birth.

So what's prompting the increase in C-sections? First of all, technology has come a long way in assisting doctors during births — but continuously checking in on babies' vitals might mean more C-sections. According to Stat News, doctors will sometimes decide on a C-section if a baby's heart rate goes up or down during labor, even if that heart rate change isn't necessarily spelling out danger. "Without any evidence at all to suggest continuous fetal monitoring improves outcomes, it has become a standard of care," Dr. Terrie Inder, a neonatologist at the Brigham and Women’s Hospital in Boston, told Stat News in 2015.

The researchers behind the American College of Obstetricians and Gynecologists' Safe Prevention of the Primary Cesarean Delivery report also recommend that obstetricians take another look at what constitutes "slow labor," another common reason for having a C-section, since — as the researchers wrote in 2014 — "contemporary labor progresses at a rate substantially slower than what has been historically taught." Non-medical interventions, such as giving women access to continuous labor support, can also help reduce the number of C-sections that occur.

According to Today, older and heavier women are also giving birth more often than they did in the past, and more women are having multiple gestations, thanks in part to successful in vitro fertilization. All of those things can lead to more complicated deliveries, thus increasing the number of C-sections that women have. And the number of women who are choosing to have vaginal births after having a C-section with a previous baby (VBAC) has also decreased, going from nearly 30 percent in the 1990s to around just 8 percent today. According to research published in Clinics in Perinatology in 2011, that puts the United States' VBAC rate at the very bottom of a list of 14 industrialized countries, three of which had VBAC rates that were over 50 percent.

There are many reasons why we've seen the number of C-sections go up in the United States, and bringing that rate back down is going to require fetal monitoring training improvements, changing definitions of labor norms, and further labor support for low-risk pregnancies. Aside from that, however, moms dealing with high-risk pregnancies should definitely be heeding their doctors' advice and go with whatever delivery method is safest for them and their babies.