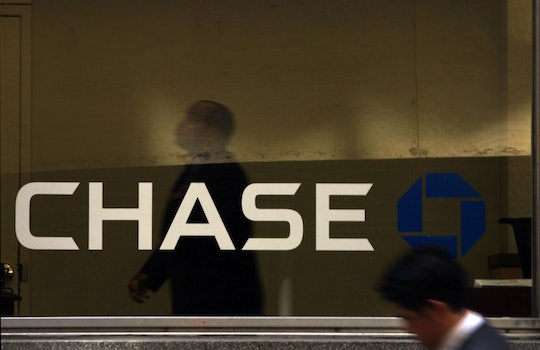 On Thursday, Chase Bank experienced one of the most unfortunate kinds of technical glitches — one that led customers to believe their money had been stolen (or worse) when they couldn't access their online accounts and to subsequently freak out on social media. Now, those panicked people can rest assured that that's not the case, but they definitely still need to know why the Chase Bank systems are down. The culprit is a nationwide online system outage, and the bank announced soon after the hysteria started to grow that it was working to get it all sorted out.

"We’re working to restore access to our website and mobile app," Chase Support tweeted shortly after 5 p.m. Thursday. "We"re sorry for the inconvenience and appreciate your patience." The tweet followed a slew of others from users who had noticed that all was not well with their bank accounts — and it had nothing to do with overspending at the bar or splurging on a new pair of designer heels. According to ABC 6 in Columbus, Ohio, attempting to log onto the bank's website yielded nothing but an error message, and the notification that flashed over the mobile app was even more ominous: a heart-stopping: "N/A" for account balances.

Soon after the debacle erupted, though, some self-identified Chase users on Twitter used the platform to announce that, for them, the problem had been adequately addressed:

For its part, Chase hasn't yet confirmed via Twitter that its systems are back up and running. But despite what's going on with the website and mobile app, customers should still be able to use their debit cards for purchases, a customer service representative told CNBC.

Still, that brief lull before customers knew that the contents of their bank accounts hadn't actually be sucked dry was a stressful one. So stressful, of course, that it prompted comparisons to worst-case-scenario and straight-up dystopian TV shows:

And there was perhaps the scariest knee-jerk assumption — that the money had been stolen:

Still, moments like these really call for some reflection, introspection, and a honest confrontation of the ephemerality of all that we believe to be real and secure:

Twitter jokes and flip-outs aside, it's certainly a relief that these bank accounts didn't simply go poof without their owners even getting to have any fun, like by spending all their money on a trip to Tokyo.