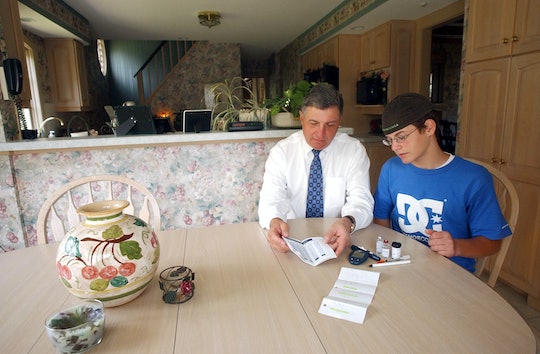 Around the same time that many kids across the country are getting sugared up on Peeps and jelly beans for Easter, a new multi-state study revealed that childhood diabetes rates are rising. What's more, researchers labeled the cause of the uptick, documented between 2002 and 2012, as "unclear." But what is clear is that the significant increase in diagnosed cases of both type 1 and type 2 diabetes — which was formerly called "adult-onset" diabetes because of its previous rarity in children — is a problem that must be addressed to protect kids' health and well-being.

Funded by the Centers for Disease Control and Prevention (CDC) and the National Institutes of Health (NIH), the study was published in The New England Journal of Medicine and marks the first-ever report to analyze and estimate diabetes diagnoses trends in youth up to age 19. And those trends are striking: During the decade studied, new cases of type 1 diabetes in youth rose by 1.8 percent each year; The increase was an whopping 4.8 percent annually for type 2. According to an NIH press release summarizing the findings, the study included youth aged 0 to 19 with type 1 and those between 10 and 19 with type 2, for a total of 11,244 youth.

The increase was most pronounced among minority children and youth studies. While white 10- to 19-year-olds experienced an increase in diagnosis rates of just 1 percent, the bump was 8.5 percent for Asian Americans, 6.3 percent increase for black youth, and 3.1 percent for Hispanics.

"Because of the early age of onset and longer diabetes duration, youth are at risk for developing diabetes related complications at a younger age," CDC epidemiologist Giuseppina Imperatore said in the press release. "This profoundly lessens their quality of life, shortens their life expectancy, and increases health care costs."

A condition in which the body fails to produce insulin, type 1 diabetes was once called "juvenile diabetes." The development of type 2, on the other hand, is associated with excess weight and inactivity. And according to The Los Angeles Times, the current obesity rate among young people in the United States is at about 17 percent — more than three times what is was in the 1970s.

KidsHealth reports that there is no way to prevent type 1 diabetes. In fact, doctors don't even have a way to anticipate who will get it and who won't.

For type 2, the situation is different. Indicators that kids are more likely to get this iteration of the disease, which is the result of body fat's impeding cells' ability to produce insulin, include having a family history of type 2 diabetes, obesity and inactivity, having a mother who had diabetes during pregnancy or having a birth weight of nine pounds or more, and simply being an American Indian, Alaska Native, African American, Asian American, Hispanic/Latino, or Pacific Islander, according to the National Institute of Diabetes and Digestive and Kidney Diseases (NIDDK).

Parents can help to mitigate risk factors, though. Try limiting screen time, encouraging physical activity, and modeling healthy eating habits, the NIDDK suggests. Diabetes isn't something to mess around with, and the earlier parents can get an understanding of what they're dealing with, the better.