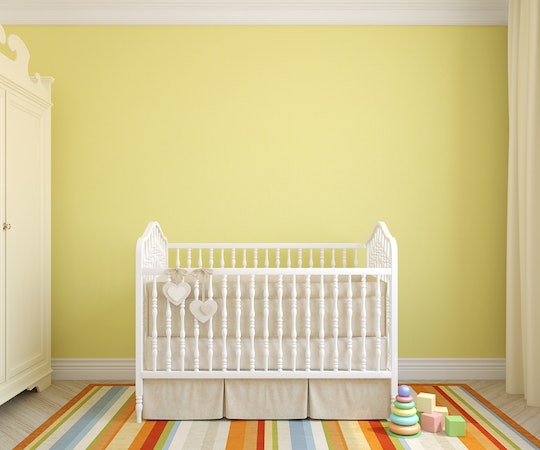 As a parent, you always want the best and safest for your babies, but when it comes to safe sleep, there are people on both sides with very strong opinions. After all, you were probably raised sleeping on your belly, with nice, plushy crib bumpers and blankets in one of those spring-loaded, drop-side cribs, and you're just fine, right? Well, as the saying goes, you do your best until you know better, and now, we know better. Drop-side cribs are now illegal, and blankets shouldn't be in your baby's crib, but why are crib bumpers unsafe? Surely it has to be safer than the open slats just begging for your baby's arm, right?

For a 2007 study in The Journal of Pediatrics, extensive research was done on crib bumpers and crib-related deaths and injuries. It was found that in accidental baby deaths reported to the medical examiner or coroner, many were due to crib bumpers for reasons including suffocation, being caught between a bumper and crib mattress or rail, and strangulation from crib bumper ties. The study also found that of the 22 different brands of crib bumpers researched, all had hazardous, potentially dangerous properties.

Pediatrician and pediatrics professor, Dr. Jarret Patton, MD, Fellow of the American Academy of Pediatrics (FAAP), agrees. "Crib bumpers are unsafe as they allow a soft surface into the crib, which can suffocate an infant if they become wedged against it," he says to Romper.

Pediatrician Dr. Steve Silvestro, MD, of Georgetown University Hospital and Metropolitan Pediatrics, reinforces that same concept. "Because bumpers are soft — after all, they are designed to act as a cushion on the crib rail — it's easy for the material to cover both the baby's nose and mouth, blocking all chance of air entry," he tells Romper.

It's simple. "Crib bumpers should not be used," Patton insists. "Infants should always be placed on their back to sleep in a firm area designed for infant sleep, such as a crib or baby box."

And, Silvestro adds, suffocating is not the only risk when it comes to crib bumpers. "While the biggest reason that we discourage bumpers is their possible link to SIDS," he says, "older babies and toddlers can use bumpers as a step and potentially climb or fall out of the crib. So you're hit with risks at any age."

So why do so many parents feel the need to still use crib bumpers in their babies' cribs? Well, according to CNN, many believe that bumpers will prevent head injury (from baby's head bumping the crib slats) or limbs getting stuck in-between the slats. And though that might have prompted the initial need for crib bumpers, it's no longer the case.

"If your infant gently bumps themselves on the side of bumper-less crib rails," Patton tells us, "it will not cause them serious harm and would likely not even disturb their sleep."

Why are crib bumpers still available? Even though the American Academy of Pediatrics (AAP) recommends avoiding the use of crib bumpers, the U.S. Consumer Product Safety Commission still won't ban them, which tends to counter all of the overwhelming evidence that they can be dangerous. According to the AAP, "crib bumpers are decorative only; they do not serve any safety purpose whatsoever. In fact, the science is clear that crib bumpers pose a serious suffocation hazard to children, and that evidence has grown."

But, even if scientists and health professionals confirm the fact that crib bumpers are unsafe and unnecessary, the fact that they remain on the market can be confusing to well-intentioned new parents.

At the end of the day, only you, as a parent, can make the decision of what's best and safest for your kid. You do your best until you know better, but, when you know better, you do better. And for many, that means getting rid of the crib bumpers.